On Friday, January 17th a group of approximately 15 people took control of a busy commuter street on both sides of a ground-level rail crossing for the CN main line in Kingston, Ontario. We used banners and our bodies to stop traffic and flyered the waiting cars with information about the ongoing struggle on Wet’suwet’en territory.

I chose to participate in this action because I believe we should build a collective social force that threatens critical infrastructure whenever land defenders are attacked. #ShutDownCanada should be a threat and a promise, not simply a hashtag. I think we are at our strongest when we do this in public and invite others to join us in building a Turtle-Island-wide rapid response network that has the back of Indigenous land and water protectors. Last January’s actions inspired a lot of us to continue fighting along these lines, whether or not they had much impact on the actions of pipeline builders and police.

Our assumption was that this action would also result in the closure of the rail line. This was not the case. Despite a group of people standing alongside the tracks inside the boom gate right in front of CN staff, and despite a large traffic jam across the tracks being controlled only by a group of non-professionals with fabric banners, CN officials chose to close the track for about one minute, then re-opened it and allowed trains to travel along behind us.

Ultimately, the action still felt largely positive. We held onto an arterial road for more than our intended 20 minutes (a conservative window based also on the assumption that we’d be dealing with the police response to a rail blockade). Many of the drivers were surprisingly supportive despite being held up substantially during the Friday afternoon commute. Of course, some of them were instead angry. People even had a few conversations through open car windows and answered questions about why we were there. The police response came after our departure. Several people came out who I haven’t seen at similar actions in the past, and I suspect it was a new kind of risk for more than one of them. I hope that it felt empowering and that it will embolden us for future collective actions.

I learned a few things from this action. CN’s decision to shut down the line does not work the way we thought it would. They clearly are not as concerned about liability or human safety as we thought they would be. In the future, if we did this again, it might make sense to have additional bodies to hold the track itself and somehow make it more clear to CN officials that we don’t intend to move. Or we could just choose to hold a road, but in that case we almost certainly could have done so for longer.

Solidarity with Wet’suwet’en people defending their territories. May the fossil fuel industry collapse and may all those fighting for their freedom and sovereignty be victorious. Stay tuned for future actions if Coastal Gas Link and the RCMP continue their assault on the Wet’suwet’en people. 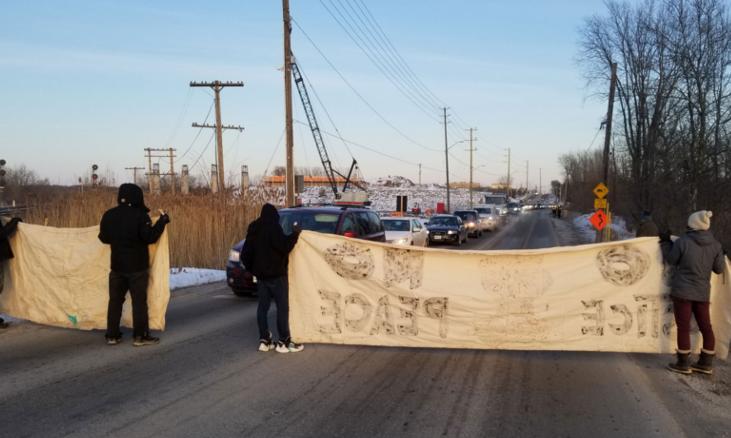