From Keep Your Rent Hamilton

In the last week, tens of thousands of Hamiltonians have applied for the Canada Emergency Response Benefit (CERB), the government’s COVID-19 income support package which provides payments of $2,000/month for up to four months. In this post we look into the nuts and bolts of the CERB rollout and consider what the government hopes to accomplish by ladling out all this cash.

For working-class people in Hamilton, $2,000/month is a lot of money. And it comes at a time when people that did not pay rent on April 1st are feeling the pressure to find the money somewhere for their landlords. Recent surveys estimate that 30% of renter households across Canada (source) and 25% of renter households in the Greater Toronto Area did not pay April rent (source).

Tenants have received letters, phone calls, threats of eviction, and harassment from landlords knocking on our doors to demand rent. So it makes sense that tenants would be tempted to hand over our CERB money to our landlords to get them off our backs.

But we should think twice before giving our CERB money to our landlords. Nobody knows where the COVID-19 crisis is going or how long the slowdown will be. The wiser course for tenants at present is to hang onto cash until the forecast is a little clearer. In any case, the CERB comes with difficulties of its own. The devil is in the details.

Workers who qualify for the CERB will have to repay a large portion of the $2,000/month they receive at tax time next year. Assuming a 20.5% income tax rate (the combined provincial and federal rate for anyone earning less than $44,740), $410 will have to be repaid from each cheque. This means CERB is really worth $1,590/month at the end of the day. And remember there is no way for workers to make up the difference, as you are not allowed to earn additional income while on the CERB. After paying rent, there is little CERB money left for food and other essentials.

You can get CERB payments of $2,000/month for up to a maximum of 4 months (16 weeks). Those who applied in April will have their payments stop in July. The government has given no indication that workers who remain unemployed after July will receive EI or some other benefit. It is entirely possible that those who receive the full CERB benefit over the next four months ($6,360 after taxes) will have to rely on this money to survive the COVID-19 crisis, however long it lasts, until we can return to work. Current projections from Ontario public health officials suggest the pandemic could last anywhere from 18 months to 2 years (source).

A recent report from the Canada Centre for Policy Alternatives found that a third of unemployed Canadians (862,000) will not be eligible for CERB or EI money. This includes:

Furthermore, social assistance recipients (e.g., people on OW or ODSP) will face a 100% clawback of any CERB payments. If they get $2,000 from the CERB, their social assistance transfers will fall by $2,000 (many don’t even get that much).

Despite the fact that many people are ineligible for the CERB, anyone who applies automatically gets the money (Rosa Saba, Toronto Star, April 9, 2020). There is no oversight or verification. If someone accesses relief in error, or the CRA disqualifies a person as ineligible next year, that person will then be faced with repayment of the relief money and further financial or legal penalties. But with Justin Trudeau saying over and over again that “there is $2,000/month for all Canadians in need” it’s understandable that many people will apply in error and find themselves in trouble at tax time next year and in debt for months afterwards.

Update: On April 15, 2020, the government announced that CERB eligibility would be extended to include: unemployed workers and seasonal workers whose EI payments have expired, as well as part-time workers earning less than $1,000/month. The Canadian Centre for Policy Alternatives reiterated that even with these changes, there are many Canadians who should be able to access the CERB but can’t. (source)

Who benefits from CERB: Tenants or landlords and banks?

So how does this play out?

If 60-90% of the CERB is expected to go to landlords, then who is this relief actually for? And what emergency is being prioritized? Our need to “shelter in place”, buy food and health essentials, care for our families, and avoid contracting a deadly virus? Or our landlords’ desire to continue business as usual, with no interruption to record profits and large dividend payouts to investors? Are we tenants really expected to survive a global pandemic on as little as $40 a week?

This emergency payment is a mass transfer of wealth from taxpayers to landlords. Justin Trudeau is smart enough to pass the money indirectly from the government, to tenants, then to landlords, rather than directly to the real estate industry as a government bailout. Though of course that is what the CERB accomplishes at the end of the day.

True emergency relief would be the cancellation of rent and mortgage payments for the duration of the COVID-19 crisis, as already announced in other countries like Italy. Landlords and banks should take the financial hit on behalf of tenants and working people, rather than cashing in on the crisis.

Landlord lobbyists and public relations managers have focused their talking points on the ‘plight’ of small landlords who are apparently struggling to make mortgage payments and at risk of the banks seizing their properties during COVID-19. What they leave out is the fact that the majority of Canadian renters do not rent from small landlords, but instead from big corporations. These companies operate with large profit margins and are much better positioned than tenants and other working people to weather the economic downturn during the COVID-19 crisis.

In Hamilton, 70% of apartments are in the ‘primary market’ and owned by large landlords (2016 Census data cited in this article). This includes 35,000 units owned by private companies (50% of all units) and 14,000 units owned by social housing landlords (20% of all units), of which 7,000 are owned by City Housing Hamilton. The primary market includes purpose-built mid- and high-rise apartment buildings. The remaining 30% of Hamilton apartments are in the secondary market and owned by ‘small landlords.’ This includes 20,000 units in single houses, duplexes, basements, etc. and 2,500 units in condo buildings (sometimes formerly rental buildings). It’s worth noting that a ‘secondary market’ landlord can include anyone from a widow on a fixed income who rents a room to a student, a young couple who rents out a floor of their house to help pay the mortgage, a family who owns a few condos, to a company like Malleum that owns and manages hundreds of units in small buildings across the city on behalf of investors. There is little data on the secondary market, which makes it hard to distinguish between types of small landlords.

A recent article titled “Struggling homeowners not your typical landlord” by the Canadian Centre for Policy Alternatives describes the proportion of small landlords at the national level. Ricardo Tranjan writes: “According to the most recent (2016) Statistics Canada’s Survey of Financial Security (SFS), 62% of the almost 15.4 million households in the country (9.5 million) own their principal residence and 38% (5.9 million) rent. Among homeowners, 7.6 million own only their residence and no other real estate property; and of these, only 340,000 households rent a part of the property. That’s 4% of all homeowners. Clearly, most of Canada’s 5.9 million tenant households don’t rent from the 340,000 homeowners who rent out only a part of their residence.”

The 20 biggest landlords in Canada own 20% of all apartments (Martine August, 2020). Many of these corporate landlords are financial vehicles like real estate investment trusts (REITs) that manage billions of dollars in assets on behalf of investors and have aggressive profit-seeking strategies. For example, CAPREIT, the largest landlord in Canada, described a 4% increase in average monthly rents and a 15% increase in Net Operating Income (i.e. profit) in its 2019 annual report to investors. For years, these companies have posted record-breaking property acquisitions, operational revenues, rent increases, appreciation of property values, and dividend payouts to investors. All of this money comes from us. For years, these companies have been squeezing working-class people of every penny in our pockets, forcing us to work more and more hours to make rent. The landlord has had his foot on the tenant’s neck for years. It is finally time for tenants to breathe. 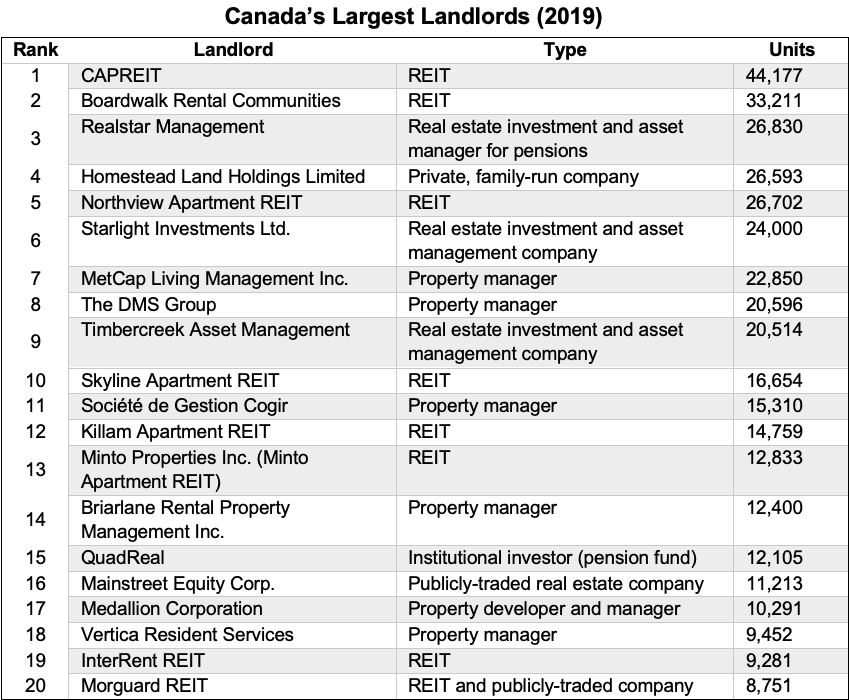 Corporate landlords, banks, and investors should shoulder the burden of this economic crisis, not tenants or low-income homeowners. Just as tenants are organizing to demand that rent payments be cancelled, small landlords and homeowners should organize to demand that banks cancel mortgage payments. Homeowners should organize a mortgage strike in the same way that tenants are organizing a rent strike. We should resist a government bailout for banks and landlords, which is essentially what the CERB program is.

Keep your CERB! Keep your rent!

Many tenants who receive CERB money will struggle to cover rent, food, and other supplies for April, let alone be able to pay May rent on top of that. Bankers, politicians and landlords’ ignorance of simple math shouldn’t fool anyone. Like the other measures that the government has introduced through the course of the economic slowdown, the CERB is a test. Ottawa is trying very hard to avoid the inevitable: directing the banks to declare a mortgage moratorium. This would first of all cut into the profits of bank shareholders. If tenants use the CERB to pay rent and the landlords pass the money through to the banks, then finance will have dodged the big showdown with the Canadian state, at least for the immediate future. We shouldn’t let landlords, banks, and the government get away with this. We can throw a wrench in this plan by refusing to pay rent and refusing to bail out the wealthy class.

On May 1, and for the duration of the COVID-19 crisis, Hamilton tenants should keep their rent, organize with their neighbours, and join others across Ontario who are calling on landlords to:

In short: Cancel rent. No evictions. No harassment of tenants.

No bailout of landlords and banks! 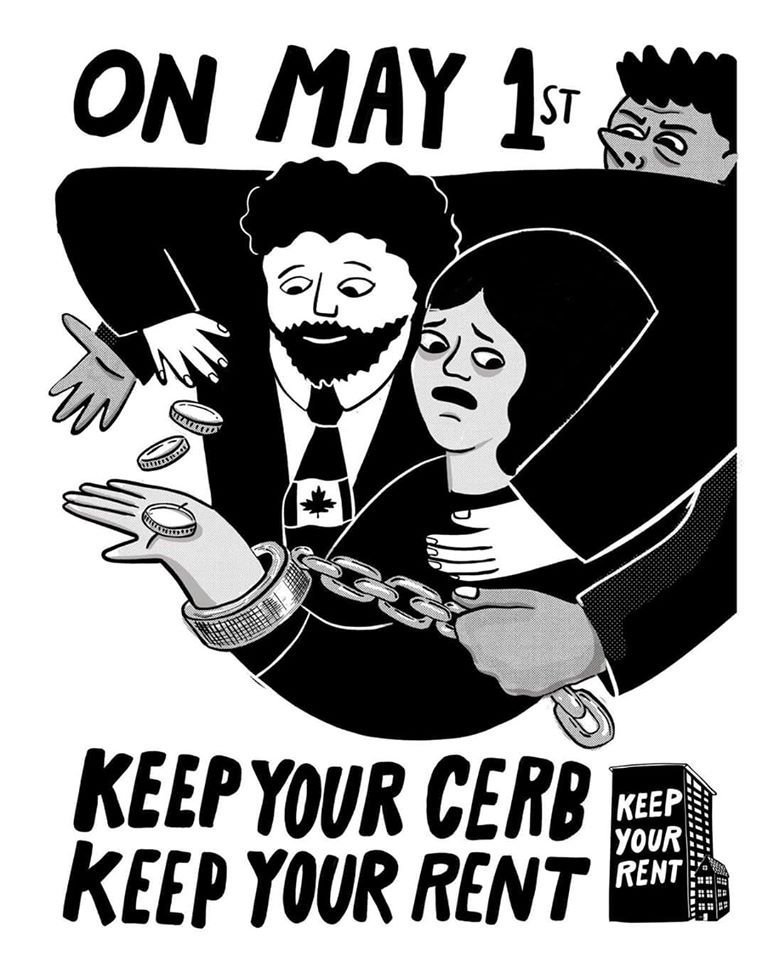