This pride week, residents of Toronto’s Queer Village woke up to a question they can no longer avoid answering: WHERE DO YOU STAND?

On June 26 2020, an ad hoc affinity group of queer and trans Village dwellers peppered the historically queer Church and Wellesley neighbourhood and the blocks surrounding — our turf — with circular floor decals, a now familiar feature of the pandemic urban landscape.

But unlike the banal directives to “mind your social distance”, these dots challenge village dwellers to take a stand on critical issues affecting the village: police and citizen policing, the housing crisis, racism and transphobia, autonomy in public spaces, and the indefensible harassment of people in our community who are underused, psychiatric consumers, sex workers and drug users. 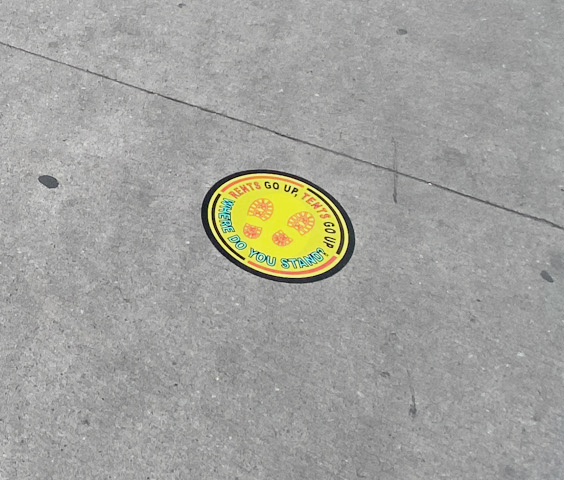 Despite it being already decimated by the housing crisis, the shelter system, already decimated by the housing crisis,  was gladly left by the city and the Mayor to become a series of overcrowded infection pits. There is no work. There is no housing. There is no food. The overdose crisis has killed too many loved ones and no one cares. There are barely any services and none of them are not overwhelmed. Tents are being evicted from otherwise unused space across the city.

Brutalized and exploited by colonialism, racism, ableism, HIV/drug/sex work criminalization and ruthless gentrification, our queer and trans family have nowhere to exist except for the Village. Detention, death and disease is being thrust down from every corner. No wonder people are freaking the fuck out.

Yet an increasingly organized milieu of citizen police, cranky Facebook users and other rich assholes have taken it upon themselves to actively photograph, profile, and harass street-involved people in the Village. For weeks, someone on Monteith (facing Barbara Hall Park, a last refuge for many) installed a Mosquito Deterrent Device, which played non-stop sounds at unbearable frequencies to abuse people in the park. Others organized a vigilante facebook group with the goal of photographing, profiling, policing and otherwise haranguing vulnerable people still  experiencing great distress while other people pull the mask off and move on.

The city wants poor people to disappear, and the Village rich want them locked up. We refuse to let that happen. You will never take the streets from street queens.

These are our neighbours and community members. As a group of queer street kids, sex workers, drug users and stunt queens ourselves, we know where we stand, who we stand with and why we will fight for the soul of the village. Welcoming and protecting queers, drug users, psychiatric survivors, homeless people, sex workers and street kids of colour is the foundational value of this neighbourhood and remains so. Street queers are the reason we have Pride in the first place. The Stonewall Riot, the Compton Cafetria Uprising, these were started by Black street queens and other queers of colour. Who were the first people charged in Toronto’s historic bath house raids? Drug users. Those shiny gay rights, access to HIV treatment and PrEP, the vibrancy of our neighbourhood — we all owe this to the poorest, most targeted amongst us. How dare you turn your back on them in time of need. 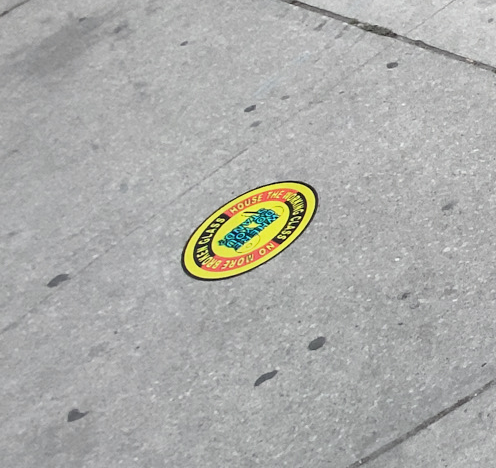 We are under no illusion that the upper class will change their minds. After all, all that greasy money was inherited through genocide and slavery,  and is maintained through the brutal exploitation of the poor and the co-optation of the movements they built. They will cling to those dollars until they die, and after. This action is not for them. There is no point in playing nice with the enemy, and we got plenty for that ass later anyhow.

The question we posed is for everyone else.  Where do you stand?

We know we have many neighbours who are tiring of looking away at injustice. Where do you stand?

Maybe you give a free cigarette here or a handful of change there, knowing it is not enough. Where do you stand?

There is no neutral. If you live in Toronto’s Gay Village, you know that it’s about to burst. Now is the time to decide. Will you align yourself with the upper class, the police, and the developers, or with the homeless street kids and drug users who have fought and fight so hard for queer and trans power? Actively build relationships with people in distress. Look honestly at what is going on and build proactive, direct solidarity. There is a war being waged on this place we cherish.

Stop playing around. Where the fuck do you stand?