From the Barton Prisoner Solidarity Project. This post will be updated as news emerges. For details about the origins of the strike and its demands, see the bottom text, Empty Promises

Update from Day 2 of the Hunger Strike

Today around 11am a small but enthusiastic group of hunger strike supporters gathered at the Barton Jail to show the folks inside some solidarity by holding banners and signs. We visited both sides of the jail east and west and heard banging and tapping from inside.
We also heard a report of fireworks being lit off on both sides of the jail in a beautiful show of solidarity with the hunger strikers last night.

We need to keep the pressure on the administration from the outside letting them know that the demands of the prisoners should be meet in full. Yesterday it was reported that the phone line to the jail was being unanswered with in a few hours of a post that went up asking folks to call in with their support. We are asking folks to keep trying that number to keep up the pressure on the jail. When that number fails to be answered call The Ontario Solicitor general office: 416 326 5000 and tell them that you support the demands of the Barton jail Hunger Strikers.
If you have access to a Fax why not send the jail a fax: 905 529 0977

Thank you for all your support and sharing of posts and phone calls and messages. We need to let the folks inside that they are not alone and we support their struggles.

Keep a watch on our social medias for more updates and how to further your solidarity!

We went out to the jail this morning and flew banners announcing the strike and providing our number for other ranges to call and learn about the action being taken on 4B. We go a dozen or so calls, and then mid afternoon heard again from prisoners on 3B who had held meetings on their ranges and 35 of the 45 prisoners there had agreed to join the strike for the same demands. This means at least 70 prisoners are currently refusing meals in Barton. The prison medical staff took them to check blood pressure and weight, which means the institution recognizes it as a meal refusal.

On a disappointing note, we are hearing that the jail’s phone has been disconnected — it just rings and doesn’t pick up to the automated system any more. The Barton admin are so afraid of public scrutiny that they will shut off one of the only ways for people in the community to ask them questions or share opinions. This makes the rally tomorrow all the more important! See you there at 11am. 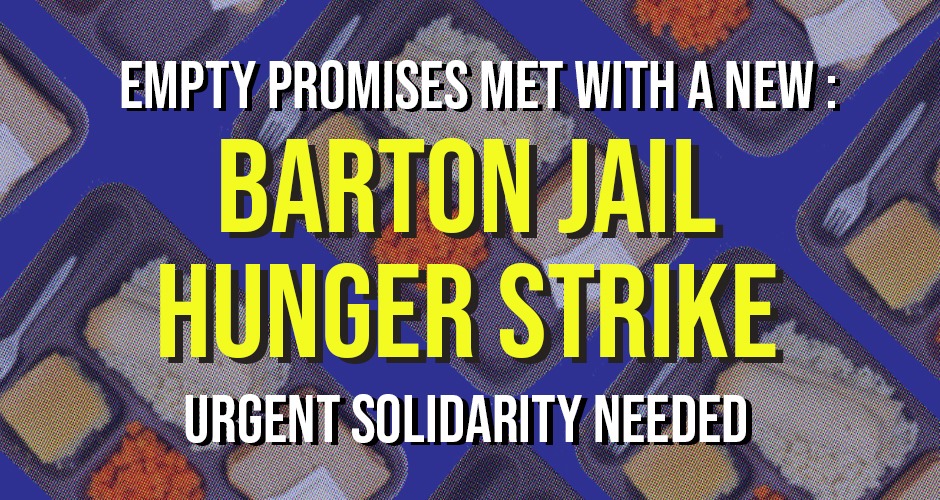 Starting this morning, August 5th, prisoners on range 4B in the Barton Jail initiated a hunger strike, their third in the past two months. Their most recent strike in late July ended quickly when the administration agreed to meet their core demands: Access to books from outside and more items available from the canteen. (The full list of demands is below). However it seems that these were empty words, as more than a week later there has been no follow through.

Hunger strikes are a dangerous tactic and the 4B prisoners are prepared to go further with it this time, since it is clear that the administration will make empty promises to undermine collective action. They need outside solidarity to both help them meet their goals and to protect them from reprisals. Prison is set up to be free of scrutiny, but by paying attention to the voices of prisoners and showing them that they will never struggle alone, we can take a powerful step in breaking down the walls.

Both of these core demands — the books and basic staples like noodles and disinfecting soap — are standard at other facilities but are arbitrarily banned at Barton. The superintendant has the ability to meet these demands immediately, the powers from the ministry are already in place. We call on you to support striking prisoners at Barton by calling the superintendant’s office at 905-523-8800 and letting them know that you support the hunger strikers. (There is a full call-in script below). Tell us about your call on social media or email us at bartonsolidarityproject@riseup.net.

We are also calling for a rally tomorrow, Thursday, morning at 11am. Details to be posted soon!

Access to books sent in from outside. Other provincial prisons allow for books to be ordered from the publisher or retailer to prisoners and Barton could easily change the policy to do the same. This is a core demand.
More items on cantine. The Barton Jail’s canteen list is missing many items available at other institutions, including important staples like noodles and disinfecting soap.
Raise the weekly canteen purchase limit. The purchase limit had been temporarily increased to $90 from $60 as a covid measure, but this was rolled back. At the same time, cantine prices increased. The limit has been set at $60 for ten years while prices have nearly doubled for some items.
End lockdowns. In response to the last strike, the admin ended rotating covid lockdowns. However, since then, there have been lockdowns every evening. This undermines negotiations between prisoners and the admins because it is not in the spirit of the agreement
Allow anyone to visit. In response to the first Barton hunger strike, the admin brought back visits, but introduced a bizarre and arbitrary restriction forcing prisoners to submit a list of three people who may be permitted to visit them. There is no health reason for this, scrap this silly restriction.
Finally end the delays in mail delivery. Mail typically takes between five weeks and two months to make it from Barton’s front desk to the recipient. This is ridiculous, removes its usefulness as a form of communication, and is a violation of the prisoners’ rights.
Daily access to yard. This is also spelled out as right for prisoners, but for the past many months it has only occurred once a week at best. Prisoners were also promised access to the gym last winter, but there has been no movement on that either.
Keep and improve the new phone system. Since the start of covid, provincial prisons finally changed their incredibly restrictive phone system. Prisoners ask that the ability to make direct calls (rather than only collect calls to landlines) be permanent and that they be able to top up their calling cards with their own funds.

Call the Barton Jail at 905-523-8800 and either ask for the superintendant’s office or follow the options.

I support the hunger striking prisoners at this facility and I believe their demands are reasonable. Access to books is crucial and there is no good reason for such heavy restrictions on prisoners having access to books of their choice in useful quantities. The restrictions to visits, cantine, yard, mail, and the phone system seem arbitrary and needless and should be lifted immediately. I am concerned that commitments made by the institution are not being met and that prisoners are pushed to take risky steps like a hunger strike due to these empty promises. I understand that all of these demands are within the superintendant’s authority to meet and I will be following the situation closely.