From the Toronto IWW

During the 2019 Pride Festival in Hamilton, Ontario, a group consisting of white supremacists, homophobes and Christian fundamentalists crashed the festival spewing hate and intolerance, even resorting to violence against Pride goers. However these attackers were met with resistance from the LGBTQ community and its allies. Following the attack, the Hamilton Police Department proceeded to prosecute the very people who defended the LGBTQ community.

Barry Conway, a long-time labour activist, is one of these defenders being prosecuted. Barry was charged and is being tried for allegedly “assaulting” an extremist preacher named Phillip Ness-Thomas; a man who is a part of a group called the “ServantHOODS”, who preach homophobia and misogyny at public gatherings, and have been specifically targeting Pride events in recent years. Ness-Thomas crashed the Pride event with a group carrying 10-foot scripture signs decrying the “sins” of homosexuality. He was accompanied by thugs like Chris Vanderweide who showed up to the event wearing body armour. It is clear that their goal was to terrorize and intimidate the LGBTQ community. The Hamilton Police Department continued that intimidation by charging Barry Conway with assault for defending himself and his community, and the case is now proceeding to trial. This is despite the Hamilton City Council’s own independent inquiry into the events at Pride, published in 2020, which clearly showed that the violence that occurred during the 2019 Pride Festival was caused by agitators from right-wing militant hate groups. 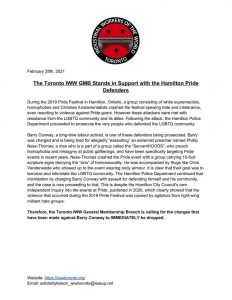