Post edited on May 30, 2019, to remove the name and photo of a former Proud Boy. This individual has left the organization, expressed a lot of regret, and moved to apologize and make amends, so identifying them as a fascist no longer feels appropriate. His name has been replaced by *** throughout

A rally attempted by the Brantford chapter of the Proud Boys on the Laurier Brantford campus was humiliatingly shut down on Friday, November 24, 2017. Fewer than five of these losers were met by fifty students and anti-fascists from nearby towns. The Proud Boys literally ran and hid when the counter-rally entered the park where they had been timidly hanging around. The counter-rally was short and triumphant, with chants ringing through the streets of downtown Brantford: “You Show Up We Shut You Down! No Proud Boys In Our Town!” and “No Fear and No Retreat! A Woman’s Place Is In The Streets!” .

The counter-rally was called by Laurier Brantford students involved in the Campus Anti-Fascist Network (CAN) after several incidents of intimidation by Proud Boys against campus activists, including a menacing disruption of CAN’s first meeting. There was lots of talk about staying inside while the Proud Boys rallied, about the need to not make yourself a target. But this group of brave students took a different path, calling out for support from nearby cities to help them reclaim the space to organize against misogyny and racism.

The Proud Boys are a fascist group — for them, violence is an organizing principle to be used against anyone they identify as “leftists” , with a particular emphasis on women who refuse traditional gender roles, gender-non-conforming people, racialized and Muslim women, and Indigenous people. They were trying to hide behind the language of free speech, but their recent actions in Brantford of trying to intimidate student groups and the university staff who support them make it clear that they are fully in line with the actions of Proud Boy chapters across Canada and the US. This isn’t a matter of free speech, but of heterosexist white-supremacists jumping on any opportunity they can to take up space and promote their particularly vile politics.

The Brantford rally was organized by two self-proclaimed Proud Boys, *** and Tim Kelly. Though they seemed to be hiding during the period for which their rally was announced, some antifascists came across them giving an interview to a student journalist in a local cafe an hour later. They were briefly confronted, with the journalist asked “How much of a fascist does someone have to be before you stop printing what they say?”and *** and Tim being told that people throughout the region see the shit they’re pulling and will be back if need be. The interview apparently ended at that point.

We provide here some details about Tim Kelly and *** in order to specifically denounce their reactionary politics and also as a case study in the kinds of ideas present in the Proud Boys. Three or four other students and local youth have also gotten involved with them. We’ve gathered their names and photos as well, but have decided not to publish them at this time — free pass this time boys, think hard before you get involved in something stupid like this again. 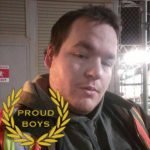 Photo of Tim Kelly from his facebook page. Proud Boys laurel courtesy of himself.

Tim Kelly isn’t a student, but seems to be a committed far-right organizer who is hanging around the Laurier Brantford campus to recruit gullible conservative students. He has ties to the Proud Boys chapter in Toronto and is much more open about his white supremacy, writing on Facebook: “It’s ok to be White, you do not have inherent privilege. You owe nothing to anybody who hasn’t done something for you. Anybody telling you any different is attempting to shame you into ethno-masochism because they feel entitled and insecure about things they and you had no part in.” This kind of denial of the existence of racism coupled with his targeted harassment of anti-racist activists puts Tim in the tradition of more conventional fascist gangs, just with an updated aesthetic and double-speak borrowed from more respectable far-right groups like Rebel Media. Like most other Proud Boys members, Tim likes to mock survivors of sexual violence while valourizing an idea of masculinity based on aggression and domination.

*** seems to be relatively recent to the world of being a far-right goon and smugly claims that his presence as an Asian man means that the Proud Boys couldn’t possibly be racist. Unlike traditional white supremacist groups, the Proud Boys don’t organize around the supremacy of a so-called white race, but rather around the supremacy of the culture that “race” has produced, as though culture can be separated from the people who practice it. One example is *** and his crew’s support for the recent Proud Boys disruption of a Mi’kmaw ceremony in Nova Scotia on July 1st, on the grounds that they had “disrespected the flag”. This idea of backwards cultures needing to be corrected by a superior one is exactly the kind of racist garbage that justified residential schools, an institution that casts a particularly long shadow over Brantford.

*** brags about being a CEO of a clothing company called “Generation Alpha”, which is clearly booming, having no website and just a facebook page with a dozen likes and a single review calling him a racist. The company seems to have a whopping two products — a shitty baseball cap and a branded t-shirt with the slogan: “ I came, I saw, I fucking dominated”. *** seems to just be hunting around for ways that he can present himself as strong and manly, the ideal target for far-right campus organizers like Tim Kelly. Unfortunately ***, when you begin associating yourself with fascists like the Proud Boys, you’re no longer dealing with just another opinion in the marketplace of ideas — you’re pushing forward an ideology that is a serious threat to a lot of people and that will be taken seriously.

Both *** and Tim are amateur comics who spend time at the Starving Artist Gallery Cafe and Brant Theatre Workshops in Brantford — why not get in touch and tell them how much you like when groups organizing around “western chauvinism” and “refusing to apologize” for the atrocities of Canadian colonialism are given space on stage.

Although we (the individuals writing this text) don’t live or study in Brantford, we are grateful to have been able to participate in this demonstration alongside the students and residents who called it. We believe that when we help others to be brave and confront scumbags like the Proud Boys in their town it gets easier for us to do the same where we live. As anarchists, we also strongly value autonomy and don’t want to take control over a struggle initiated by others that they will live everyday. We don’t need any dedicated antifascist group, but rather just to act in opposition to all forms of domination and in solidarity with people in struggle.