From The Tower, Hamilton’s Anarchist Social Centre, after a riot on Locke St Saturday, their windows smashed Sunday night, and then their door kicked in Tuesday night

We’ve held off on making any public statements so far because it’s really not our desire to have conversations on the internet, such a toxic and alienating place. But having had our space attacked twice in the last couple of days, we feel like it’s important to share a few reflections and be clear about where we stand.

First, no, the actions on Locke and Aberdeen on Saturday night were not organized by the Tower, but yes, we support what happened and are in solidarity with those who carried them out. Class war is happening every day in this city, with constant attacks on poor and working people. It’s disappointing that so many only care about the occasional moment when a bit of anger flows back the other way. The ongoing effects of gentrification in this city are heartbreaking – waves of displacement, growing violence, and intensifying poverty. You cannot expect for all of this to just be swept under the proverbial rug. We have zero tears to shed for Locke st.

We feel that a single family being evicted is far worse than everything that happened on Locke St, even if you believe that running luxury businesses is a neutral act. And the level of outrage is particularly despicable considering that there have been two random stabbings of women in the last few days as well. It’s beyond disgusting to see conversations about artisan donuts being prioritized over conversations about violence against women.

This isn’t just whataboutism, this is us picking sides. When shit goes down, we aren’t on the side of the rich and business class. We’re in solidarity with everyone who resists the dominant powers in this city and we make any tactical criticisms we have privately. We oppose all repression and all collaboration with the police. 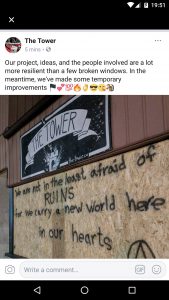 We’ve received several specific threats from far-right groups in the last few days foreshadowing the attacks on our space. Unsurprisingly, the local business class and the white supremacists who organized anti-immigrant demos in the city last year have found themselves on the same side.

All the dramatics from Locke St show that they expected not only to make money pursuing their self-interest and ignoring its impacts on others, they expected to also be loved for it. We aren’t “shocked and horrified” by being attacked because we never expected the powerful and their bootlickers in this city to thank us for opposing them.

We know it’s not boutiques that are the main driver of gentrification and the suffering it brings; it’s real estate investment, speculation, and the municipal policies that encourage them. Small business are often visible and vocal in cheerleading, but aren’t the ones redeveloping whole blocks or carrying out mass evictions. What they have done, though, is to put themselves on the side of the speculators and landlords, positioning themselves to profit off forces that harm most of their neighbours. We’ve chosen to critique and oppose them in the past because of their alliance with the rich and the big capitalists, and though they’re not most responsible, their actions do have real consequences.

To be clear, we won’t be filing police reports over this, but rather dealing with it autonomously and drawing on networks of mutual aid. The Tower will continue hosting the kinds of events and groups it always has, putting resources in common and sharing ideas. The events of the past few days change nothing about our project or our politics and we call on everyone with whom we’ve shared moments of struggle in the past to take some deep breaths and realize that although things are more intense right now, nothing has really changed.

6 thoughts on “Hamilton: The Tower’s Statement on Recent Events”