After a tense week-long standoff between city bureaucrats, local journalists, and police, it seems anarchism has finally been cleared of being a hate crime in the city of Hamilton. On Thursday, Mayor Fred Eisenberger issued a statement indicating that he had been misinformed after making an equivalency anarchists and the circle-a symbol with white supremacists and the swastika – this coming two months after he referred to a group of anarchists as “terrorists” for their part in a Locke Street anti-gentrification demonstration.

Sure, it seems a bit amiss that the mayor should have worked himself into such a hissy-fit over a few Lexuses having their windows smashed, yknow, especially while remaining mum on actual white supremacists marching in his city, but whatever – it’s over, right?

Well, it seems this isn’t the first time the city’s wealthy and their defenders have been a bit confused about the whole hate crime thing. As the drama unfolded over the past week, I couldn’t help but be reminded of a little piece of Hamilton history that never really got the press it deserved.

Back in 2009 the anarchist and radical scene in town was in a bit of a flux, as new and old circles of people experimented with different tactics and made efforts to connect with each other to increase our capacity. It was during a social event where some of us had the very harsh realization that not only were we increasingly on the radar of other politically engaged folks in the city, but we were also being sized up by the Hamilton Police Service.

The “HPS Swarming incident” at Mex-I-Can Restaurant, as it would later be dubbed, happened the night of January 22nd, 2009.  A bunch of people from a few different friend circles gathered at the Mex-I-Can restaurant (rip) near Wilson and James for a radical folk-punk show (I know, I know – it was 2009). Music was underway and the anarchist zine table set up when there was a commotion just outside the front doors.

Some burly dudes on the street had started grabbing at our friends out having a smoke. People sprang into action, pulling our pals out of the grasp of said dudes. When a dozen police cruisers and a couple paddy wagons rushed in seconds later, it became apparent that the grabby guys weren’t just any assholes – they were plainclothes HPS officers.

After a few arrests, some tussling, and the only non-hot sauce related pain compliance techniques seen in Mex-I-Can’s history, we were all still licking our wounds when an email started to spread around. Though it hadn’t met CHCH’s hug-a-cop threshold of news when it had occurred, the story of the night was finally getting some circulation – in the HPS’ annual Hate Crime Year-End Report. 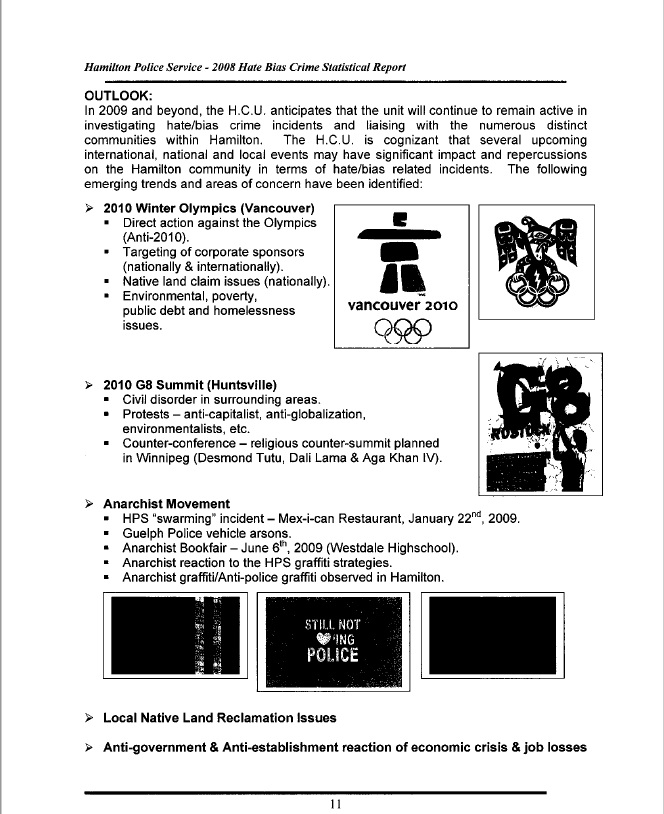 You see, it seems that officially until at least 2009 the Hamilton police understood themselves to be victims of hate crimes.

That’s right, for several years, amongst the queer-bashings, attacks on Jews and Muslims, and racist violence that got reported to the Hamilton Police Service’s Hate Crimes Unit, Hamilton cops would take the time to slip in hate reports of their own whenever they saw some anti-cop graffiti.  In that 2008 report, for example, along with the 17 hate incidents against Black people, and seven against people from the LGBTQ community, some cop decided it was important to type out, presumably through tears, a reference to three anti-police crimes.  The result can be seen in the above pie graph, where amongst the various groups of people marginalized by society and targeted by hate we have people of East Indian and Hispanic descent, people targeted for their sexual orientation and….police!  One can only assume that the six-figure salaries and ability to murder with impunity hasn’t totally cushioned the blow of having everyone think you’re kind of a piece of shit.

While the average person might need to do some mental gymnastics to regard a folk show as a hate crime, the Hamilton police, armed with a very special kind of victim complex, listed the incident at Mex-I-Can in that report.

But this fresh spin on hate criminology, defined in their own freaking report as “a criminal offence committed against a person which is motivated…by the suspect’s hate/bias against a person’s race, religion, ethnicity, sexual orientation, disability, age or gender“, was far more than just a footnote.  In both the 2008 and 2009 reports’ “Future Outlook” sections – areas to discuss trends and upcoming events to monitor – the cops *exclusively* write about the local anarchist movement, as well as just about anyone who might have even the vaguest sympathies toward social justice. Along with the movements against the 2010 Vancouver Olympics and the G20 in Toronto, other villains in their rogue gallery of hate include people working on “homelessness issues”, those boycotting sponsors of the 2015 Pan Am Games, as well as Desmond Tutu and the Dalai Lama, who were visiting Winnipeg at a countersummit in 2010 opposed to the G20.

Remember: this is the Hamilton Police Service’s Hate Crime Unit.  This isn’t just some dumbass beat cop spouting this shit, this is the segment of the police force with the sensitivity, training, and insight to specifically deal with hate crimes. These reports were presented to the Police Services Board by two consecutive chiefs of police. And what do they commit their immense monetary and personnel resources to, in hopes of making life easier for the people affected by hate in this town? Not some white supremacist groups they’re monitoring, or some anti-Muslim events being organized, or the “men’s rights” crybabies that were antagonizing feminist events at that time and have since killed dozens of people; no, they committed investigative resources to local anarchist and activist movements.

Let’s be real about what this all means: police in this city *OFFICIALLY* believed, up until 2009, that being against police officers was the same thing as being against Black people. Police in this city believed it was more important to dedicate resources that could have gone toward education or breaking up organized hatred to keeping tabs on folk shows and preparing for the arrival of an elderly Buddhist monk in a city twenty hours away.
The mayor in this city and the city’s bylaw bureaucracy, until last Thursday, *OFFICIALLY* believed that being an anti-capitalist activist, that being against rich people, puts you in the same category as Nazis (and he still hasn’t retracted the “terrorist” thing).

Now, I proudly count myself among the anarchists in town, and so I’m not trying to plead for the cops or politicians to do their jobs better, or with more sensitivity. And I’m not surprised to find that they consider me their enemy – the feeling is mutual.
I know that whatever progressive gay-pride diversity-cheering mask they put on, cops serve a function in society: to maintain capitalism, colonization, and all the oppressive systems that keep this shit train running. And I think the HPS and Mayor Freddy are great examples of how anti-hate mechanisms, when taken out of our hands and put into those of the same people who fuck us over, can be used as weapons by the powerful.

We have every right to resist, dismantle, and attack the vision of this city that these pricks are trying to force down our throats.  While doing so, let’s work together with our friends, family, and neighbours to stomp out racism, sexism, and homophobia ourselves, and let us never let those same people who attack and exploit us tell us we’re not allowed to hate them for it.

Oh, and no need to rein in those circle-a’s or the disdain for cops – let’s keep those statistics a-comin’!

Northshore note: These PDF’s were received anonymously and presumably have their origins with Hamilton Police Services. We have no reason to expect them to be unsafe to open, but it could be worth taking precautions, like opening them in a guest account or a virtual machine

1 thought on “On “Hate”, the Hamilton Police, and Mexican Food”