I am feeling pretty distraught at to moment, not so much from the cut I received as my megaphone was torn from my hand and thrown into a fountain, not so much from the punches and shoves, but mostly from this feeling that as the Chinese left, we’ve been asleep to the political dynamics in the Chinese ‘community’ for the past decade or so. Today, about 15 of us gathered at Markham Civic Centre to counter protest an event organized by Conservative Party and fascist elements opposed to the housing of refugees at a York Region School Board facility. 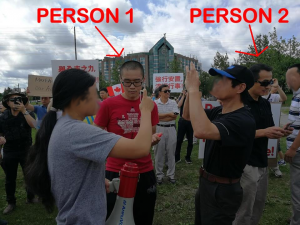 We chanted and marched to the site, expecting to confront a couple dozen protesters but instead came across over a hundred people. We were met right away by these racists head on. Person 1 in the red shirt came screaming in our faces with a megaphone (he had previously seen us in the parking lot and phoned ahead to some buddies) – apparently he’s a PC operative. Person 4 in the black shirt and glasses was especially combative, shoving into us and grabbing on to my megaphone and throwing it into the fountain. Person 2 also attempted to wrestle the banner away from us, pulled another member’s hair and kicked. Interestingly enough, after the initial confrontation, a separate shoving match happened between perhaps a more ‘moderate’ racist group and this group. Person 3 (white guy in [Canadian Combat Coalition] shirt) also came by to intimidate us, saying to me “you guys better fuck off, I can’t protect you when these guys beat the shit out of you”. After 10 minutes of shoving, more York Region Police finally showed up to separate the groups. We decided then to move towards Highway 7 to cover up their banners with our own. 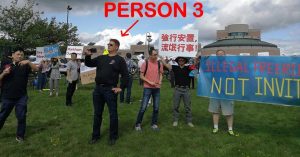 While we were happy to have served as some disruption and to challenge claims of Chinese uniformity made by these groups, it was shocking to see this level of aggression right at the start, without any escalation. It was even more shocking to see such a high number of racists – it seriously seemed more organized than some of the white supremacist actions. The impression we got was that this was organized by Conservative Party operatives opportunistically taking advantage and making natural alliance with fundamentalist Chinese baptist/evangelical churches.

We have already seen this movement grow, first with the opposition to sex-ed curriculum, and then Islamophobic action around the child with the hijab, now this. This was a very politicized group of people – politicized by the far right. These weren’t the grandma grandpas we often see paid to attend right-wing rallies in Hong Kong. Speaking to people in the crowd, they talked about refugees killing people (drawing on some erroneous connection with the Danforth shooting), they talked about the impact on their schools (with some striking similarities to segregationist discourses from the 60s), and they talked about impact on taxes. These weren’t just a bunch of ignorant people tagging along with a group. 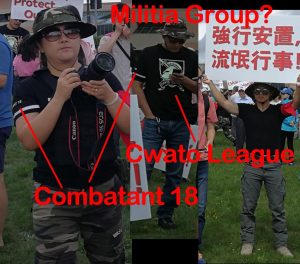 Also bizarre was the attire worn by most of the marshalls. They looked like a paramilitary group, with many dressed in kevlar vests and the signature camo bucket hat. Some wore t-shirts that bore the name “Cwato League”. There was also a Combatant 18 badge on the right arm (surely not related to the neonazi group Combat 18 are they????). Upon some digging, they appear to be a part of a group that goes by the name Canadian Weapons Tactics Association and Chinese Canadian Gun Team Association (in Chinese). While their wechat page seems to indicate something rather innocuous – paintball enthusiasts/military fetishists who organize tournaments … I do wonder if there is more to it.

I really hope today serves as a wake-up call. We on the left need to really start analyzing these growing far-right dynamics in our community and more actively begin confronting them. We need to throw up fatalistic and defeatist (and also pretty essentializing) notions that ‘there’s no point, the Chinese community is inherently conservative given how the immigration system produces a Chinese community dominated by monied folks’. Let’s concretely figure out which churches are feeding into these mindsets. Let’s identify Conservative Party operatives that have been so active in spreading these positions. Let’s ask how the hell neo-nazi/paramilitary groups are forming in our community or at the least how they’re connecting with active White Supremacist groups.

We need to begin a conversation of how to build a progressive left in the community. We need to start making connections with the many Chinese workers dealing with precarious status, precarious labour, and all manners of oppressive practices both from their Chinese bosses and the broader context of white supremacy. We need to remember that from 2004-2013, China was the second largest source for refugees claimants in Canada. These fascists are not only attacking other communities and reinforcing white supremacy, they’re also targeting the most vulnerable in our own community. Fuck these racists/fascists, let’s stamp them out.