From the Ottawa General Defence Committee

On Nov 26th, the federal government passed a “special law” that stripped the right to strike for postal workers. Postal workers had been working without a contract since January and were engaged in rotating strike actions. They now face massive fines should they continue the strike. Solidarity pickets have been served injunctions, and supporters have been arrested. Despite these threats, we must not give in to intimidation. The right to strike is the very lifeblood of the labour movement, and the key to securing a bright future for all workers in the face of austerity. For this reason, postal workers should not stand alone in this fight.

On Dec 3rd, community members organized and assembled a community picket. The plan, to take the place of postal workers who would otherwise still be out picketing if they weren’t facing state repression through massive fines. With 20 supporters wearing yellow vests (gilets jaunes), carrying signs, banners and flags, they began picketing the gates of the Ottawa mail processing plant. At first met with confusion, postal workers quickly welcomed the community picketers with high-fives, handshakes, honking horns, and even a few hugs.

Management on the other hand, called the police and fire department. Police were initially aggressive, even harassing picketers if they happened to walk off alone, but would later give up and stay in their idling cars to avoid the rain. Once the fire department arrived, they informed the police that they would not cross any picket lines, and waved to the picketers in solidarity before driving off.

As the sun began to rise, more picketers arrived to help hold the line. Songs were sung, and management were heckled mercilessly throughout the day as they paced around the parking lot, red faced in frustration. One manager in particular, could not even show his face without hearing

“BOSS MAN COME, BOSS MAN GO! ARE WE LEAVING? OH HELL NO!” or “HEY HEY LOOKIE LOOKIE! BAD BOSS! NO COOKIE!”. Through the gates, postal workers were seen cracking up and applauding. After ensuring that no trucks enter or leave the facility with mail for 6 hours, and many heartfelt exclamations of thanks from the postal workers, it was decided to pack up and leave the picket. What began quickly and nervously in the dark hours of the morning, ended with a sense of accomplishment, enthusiasm for the struggles to come, and respect for the new comrades we’ve made.

These actions by the federal and provincial governments completely expose the sham they present as “Rights & Freedoms”. There for all to see, was our own governments deep in the pockets of the employment class, treating the charter of rights and freedoms like it wasn’t worth the paper it’s written on. And they would be right! Rights and freedoms are not born into existence on the whim of a politician, but fought for with heroic acts and great sacrifice so that others might enjoy a brighter future. So too, must they be defended with the same gritty determination.

We now have something to ask of working folks, unions, and the various orgs who weren’t able to help with this picket. Join us in sending a message loud & clear to the various levels of government and the ruling elites who pull their strings. That their “special laws” and injunctions are not worth the paper they’re written on. That direct actions will continue everywhere they seek profits. That we wont rest until their oppressive institutions are torn limb from limb. Let’s get organized, plan more pickets, and talk to each other about the importance of this fight. The labour movement was born illegal, and has grown up illegal. La lutte continue!

“The labour movement was born illegal, and has grown up illegal ” -Michel Chartrand. 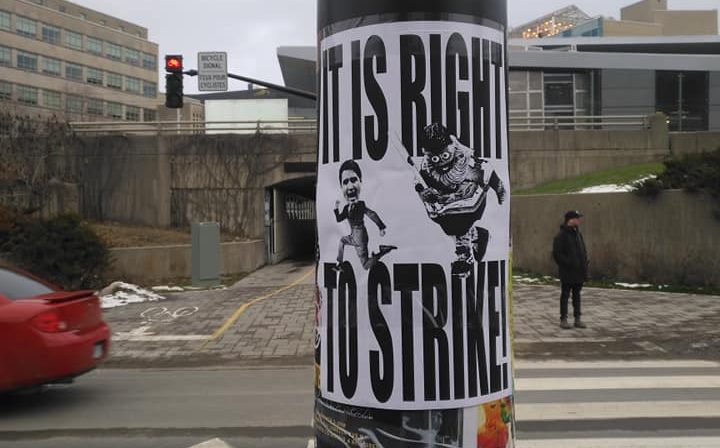