On Tuesday, October 22 and Wednesday, October 23, four antifascists were arrested by Hamilton police, watchdogs of white supremacy, in connection with the counter-protest against Maxime Bernier’s fundraising event last month. Two people living in Toronto came to Hamilton to turn themselves in, while the two living in Hamilton were arrested at their school and home respectively. Cynically, HPS chose to wait until right after the federal election before launching this wave of arrests to avoid further having their complicity in the rise of the far right in Hamilton become a national political issue. By doing so, they make obvious the political nature of these charges: they have more to do with the narrative being produced than with what happened on the ground.

Two people are charged with intimidation and causing disturbance in connection to an old woman who was yelled at and delayed from entering the venue; another is charged with intervening in an attack by a fascist goon on other protestors; and then, perhaps most strangely, we have one person charged with theft under $5000 for allegedly removing a Canadian flag from an armed fascist’s baton.

This fascist is Andre Chiasson, a member of the neo-Nazi Canadian Nationalist Party who once filmed himself burning a Qu’ran at a PEGIDA rally in Toronto [Link is to ARC]. He frequently comes armed, armoured, and ready to fight to protests, and the Bernier counter-demo was no exception. In court, the flag was described as attached to a hockey stick. In fact, it was a weapon — a sawed-off hockey stick with a custom wrist strap on the end, and a bit of nationalist decoration to top it off. The images included in this post show the custom grip modifying that hockey stick into a baton, as well as the reinforced motorcycle gloves and the helmet tied at his waist. 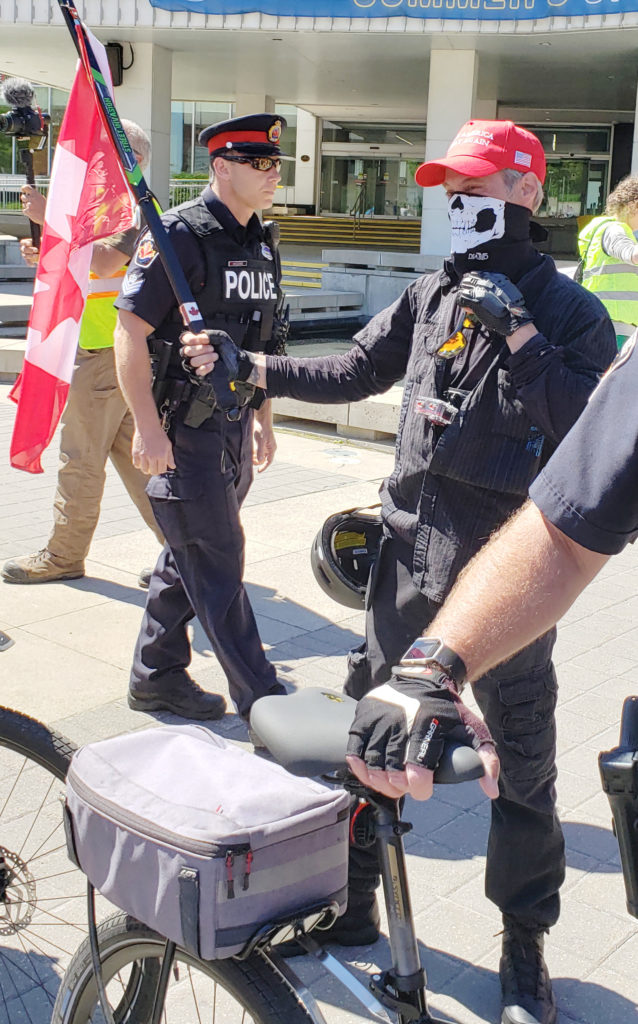 This get-up is notably similar to that of the now-infamous Chris Vanderweide, who had come prepared to use his helmet as an offensive weapon against queers at Hamilton Pride. (See here, also, photos that show Vanderweide and Chiasson side by side at that same PEGIDA rally, one month before the events of Pride.) 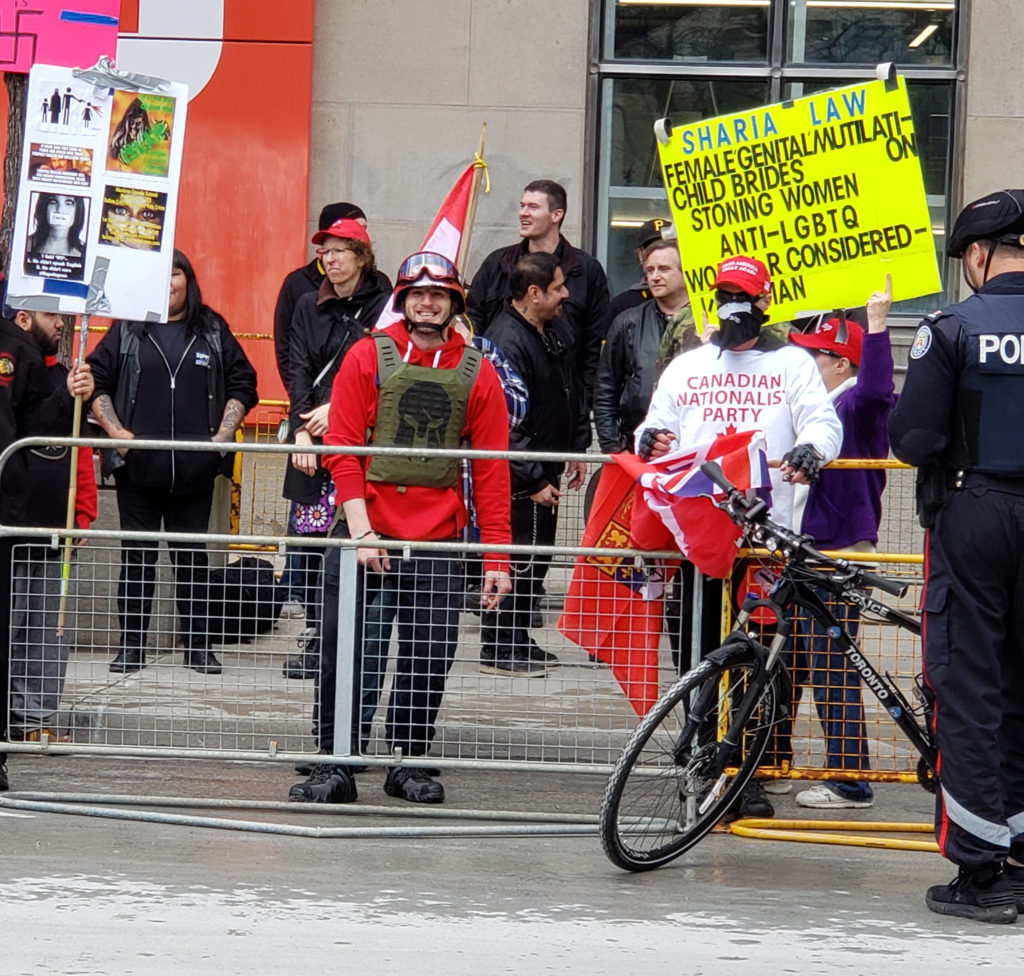 On social media, Chiasson is open about his vile beliefs and intentions. He openly praises Alexandre Bissonnette, the perpetrator of the Quebec mosque shooting, and claims that the Christchurch massacre “had nothing to do with white supremacy.” He has even posted videos of himself suiting up for protests with armour under his clothes, bragging about his intentions to fight — yet the police and media are content to portray him as the innocent victim of an unprovoked “theft.” 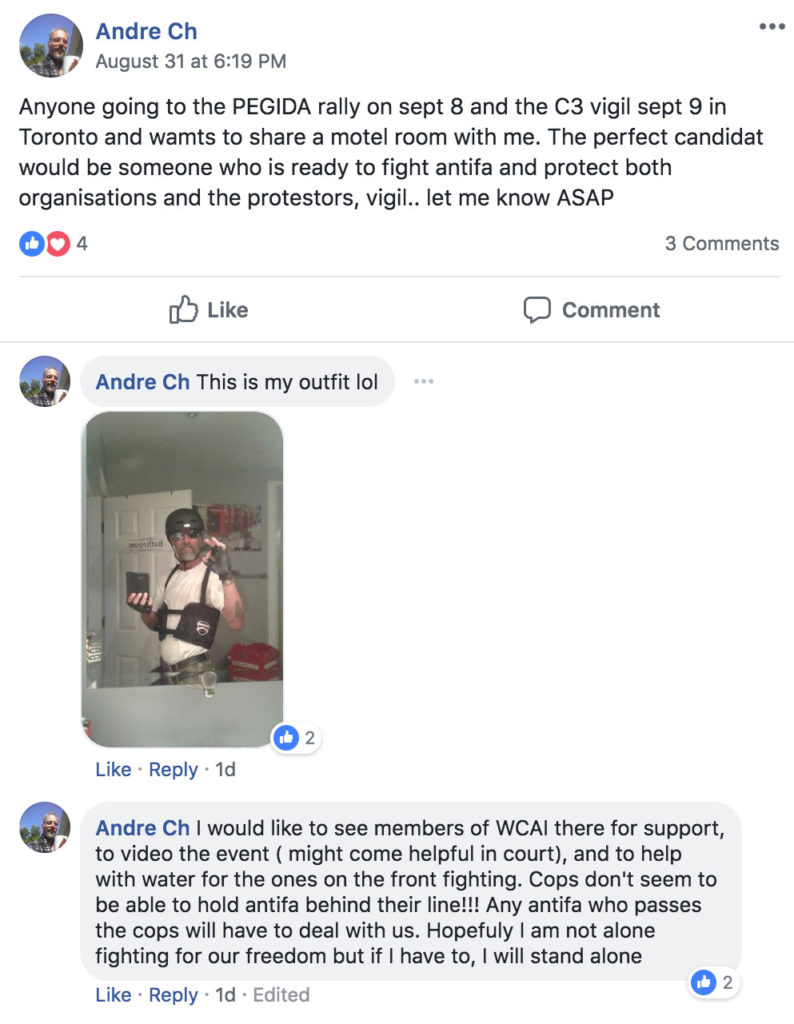 That a despicable white nationalist like Chiasson would at once like to brag about fighting and also be a snitch is unsurprising. What is surprising is the extent to which the media have followed the far-right narrative, paving the way for the police to come and lay such strange charges. Nowhere is this clearer than in our local media’s adoption of the US right’s current favourite bogeyman, “antifa.” Some  groups organizing around antifascism have used “antifa” as a name (Portland, for instance), but this isn’t the case in Hamilton. Rather, it’s an example of the closeness between liberalism and fascism that liberal media is so quick to pull out the tropes of the far right. “Antifa” exists now as a construct in the liberal/right political imaginary and is deployed at will to evoke a monolithic group, rather than a politic shared by many for their own reasons. There is a difference between asking if someone is “antifa” or if they are antifascist; one is in bad faith, to pigeonhole, while the other is a moral imperative. This disparity stops the public from addressing the larger question — why are we failing to address the pervasive problem of fascists peddling white supremacist dominant ideology? White media is afraid to grapple with its whiteness, its complicity in platforming far-right propaganda, and prefers to distort antifascist work into a caricatured “antifa” boogeyman under the guise of “non-partisanship.”

Such “investigative” journalism is not only shoddy work, but reproduces violence. When the far right calls for police repression (or extra-legal violence) against “antifa,” the media echoes that call by affirming that “antifa” exists and  participating in the hunt for its “members.” Every single incident for which antifascists have now been charged was first singled out by the media and the far right, who used outrage to drive clicks on their websites. Acting at the beck and call of fascists to provoke a media frenzy, reporters have entirely failed to critically examine the individuals they paint as “victims.” One person in particular seems to have been charged only because of his doxxing by fascists and has been relentlessly targeted since, singled out for a still-ongoing onslaught of racist harassment [Link is to ARC]. Media circulation of sensationalist imagery without context has no doubt hastened these bullshit arrests.

It is important to defend all the alleged acts that people are now facing charges for. Regardless of whether we think any particular action to have been strategic, or even whether we think it actually happened at all, we can say clearly and without hesitation that we need to be able and willing to sabotage fascist organizing, whatever that might look like. That can and does include intervening to stop an attack, yelling, blocking walkways, disarming fascists, and/or disrupting their propaganda. To fall into the trap of respectability politics and distance yourself from acts that receive backlash, or that may be poor PR, is to play right into the hands of the state. Stinging from a long summer, in which they were exposed for very publicly, again and again, for taking the wrong side on the issue of anti-queer and white supremacist violence in the city, the Hamilton police wants to assert control over what tactics are acceptable. We certainly can’t let them.

In particular, three of the defendants’ charges include “masked with intent.” Hamilton police continue to lead the way when it comes to criminalizing concealing your identity at demonstrations. (This follows HPS being the first force to use the Harper government’s “unlawful assembly while masked” law in 2018.) That those now being charged were hand-picked by the far-right and  media frenzy should make the significance of this clear. Avoiding identification is vitally important, as demonstrated by the fascist targeting of a comrade in Toronto and his family, which has included physical attacks in the street. HPS’s fixation on masking is a logical extension of their belief that the radical left is the problem. For them, taking away tools people rely on to continue their work is a step towards making that problem go away.

For those to whom this kind of police behaviour comes as a shock, it may be tempting to believe that the problem will be fixed if only investigators and officials can be brought to see the light. We can understand why you might feel this way, or even, as such, why you might end up considering giving a statement or sharing video of your own. But as antifascists who know how the Canadian state operates, we emphasize that doing so will harm people on our side. As the axiom goes, anything you say may be used against you (or your friends and comrades) in a court of law. At the time, there is no guarantee that handing over evidence will do any damage to the other side. In Toronto, while their police force claims to be investigating white supremacist threats to a family’s business, an officer openly disseminates those same threats over Twitter [Link is to Twitter]. In any city where cops can be found, the content of internal communications like Facebook groups or police “union” magazines is nearly indistinguishable from that of any right-wing discussion board. The institution of policing exists to uphold white supremacy and it can be relied on to do this, and only this, job well.

So what, then, can be done? When we heard about the charges, we did our best to support those targeted: finding lawyers, showing up at the police station and at court, talking through options, celebrating when they got out. Repression functions by separating people, trying to create divisions between “good” protestors and “bad” protestors — solidarity fights this separation by refusing to step away from those being targeted, and by defending the acts the police and courts seek to condemn.

While charges might be able force some people to step back for a time, it only stops our struggle if we let it. We call on all antifascists to show their solidarity with those charged in whatever way they choose, most importantly by continuing to organize to both counter the far-right and to build a vision of a better world.

1 thought on “Like Hand in Glove: on the collaboration between media, police, and far-right in the recent arrests of antifascists in Toronto and Hamilton”