From the Barton Prisoner Solidarity Project. Full list of demands below.

March 6 2020 — As the covid outbreak in the Barton Jail continues to worsen, about forty people gathered outside to show their support to those locked up. There are over 65 confirmed cases at the time of writing, with numbers only rising in spite of the inhuman lockdown prisoners have been facing for weeks.

We started on the north-east side of the jail and moved slowly around to the south before ending up on the north-west side. We believe our presence was visible from all the ranges on floors three four and five, and received a call that at least some ranges on two could see us as well. A mix of former prisoners, loved ones of people locked up, and those who dream of a world without prisons, we played loud music, carried banners and signs, and made speeches through a megaphone.

Prisoners always find ways to resist, even during the outbreak. The prison’s power over them is arbitrary and nearly total — they are not given even basic information about the covid status of people on the range, let alone throughout the prison, and there is no consultation about how to deal with the situation. And yet, this past week, we heard that one range initiated a collective meal refusal while another collectively refused to be tested yet again for covid. Prisoners continue to use the few minutes they have out of their cells to call us and let us know what’s going on.

There is always resistance, but it is stronger when prisoners know they are not alone. With outside solidarity, we can change the balance of power between the institution and those it cages by amplifying their acts of refusal and responding with action. 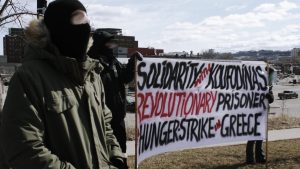 We heard a speech from one person about Dimitris Koufodinas, a revolutionary prisoner in Greece whose months-long hunger strike has him on the edge of death. We express our solidarity with Dimitris as well as with all prisoners in struggle. Acts of refusal by prisoners, like hunger strikes, can be powerful ways of focusing solidarity. The impressive movement responding to Dimitris’ action is a model for how to bring pressure to bear against the prison system.

In the Barton Jail, the struggle against arbitrary, repressive measures is far from over. The only solution to the covid outbreak is to change the underlying health crisis of overcrowding — and of incarceration itself. It’s disgusting that the Barton admin can say that it’s a health measure to lock people three to a cell with no room to take even a few steps for weeks at a time. We won’t let them get away with it, and when prisoners push back and assert their dignity and humanity against this violence, we will make sure they never struggle alone. 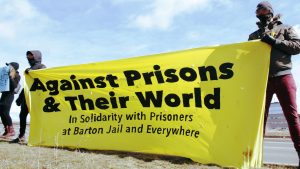 The Barton Jail admin needs to immediately:
1) Provide accurate and consistent information proactively to both prisoners and their loved ones.
2) Restore all forms of communication, including mail and phone access.
3) Involve prisoners in the decision making process about confinement measures — most prisoners support some sort of confinement to prevent spread; the process should be negotiated so that it is less arbitrary and punitive.
4) Provide unrestricted access to cleaning supplies, including soap and disinfectant, as well as anything else prisoners decide they need for basic hygene.

We also continue to call for:
5) An immediate mass release of prisoners from Barton, especially those on remand, as this is the only real solution to the health crisis of overcrowding, of which covid is just one part.
6) An end to the arbitrary restrictions imposed by the admin that make conditions at Barton starkly worse than in similar facilities — allow books from outside, stop forcing people to miss their court dates and give everyone a few minutes of fresh air a day.