Show Header Sidebar Content
Twitter Feed Reddit
Two texts from the Barton Prisoner Solidarity Project about the hunger strike in Niagara Detention Centre. The first text is from Sunday May 2nd. The text below it is from Friday April 30th. 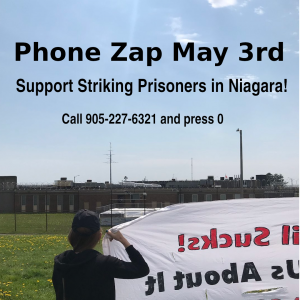 We can confirm that the hunger strike in the Niagara Detention Centre is just completing its third day! However, we spoke to someone there this morning who also shared that strikers are being targeted for repression by the institution. Today, COs entered their cells and stole their cantine items, saying they didn’t need it since they weren’t eating anyway.

This escalation of repression is very concerning, and we need to find ways to show prisoners in Niagara that they are not alone. Tomorrow, Monday May 3, please call the jail and demand that the administration negotiate with prisoners to meet their demands. Calling the jail and circulating news of the strike is a simple way of keeping the strikers safe from reprisals and putting pressure on the admin.

Call the detention centre at 905-227-6321 and press 0 to speak to an operator. You can either express your concerns to the operator or ask to speak to the superintendant, Tom Bradley. Please tell whoever you speak to that you support the prisoners’ strike, think their demands are reasonable, and that they should be met immediately. The prisoners already submitted a letter to the admin outlining their three demands, but it doesn’t hurt to repeat them:

1)Address the serious problems with the new phone system:
-Create options for adding funds to prisoners’ accounts remotely
-Introduce stop gap measures until then, such as unlimited free calls
-Remove the relationship tax that penalizes prisoners for calling the same number many times in one month 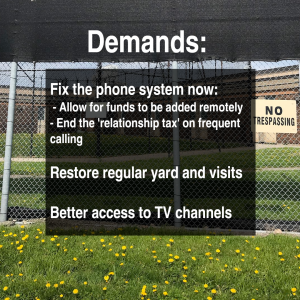 The Barton Prisoner Solidarity Project is focused on Hamilton’s Barton Jail. We are not intending to formally expand our work to Niagara, however when prisoners call us to tell us about actions, we will of course support them any way we can. We drove down to the Niagara prison today and held banners for the prisoners – it seems at least one range was able to see us through the blocked-out windows.

These demands and the actions prisoners take might seem like small things. However, prisoners across Ontario are building a practice of collective power that deserves our support every time. Standing by them when they resist is a crucial step towards a world without prison. 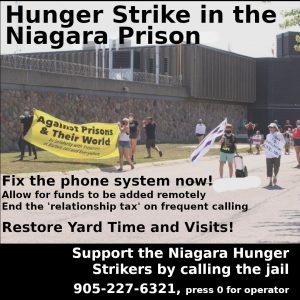 20 prisoners launched a hunger strike this morning at the Niagara Detention Centre! We can confirm they refused breakfast and lunch and intend to continue. They have submitted a collective letter to the administration outlining their demands. Their main demand is to address the major deficiencies with the new phone system (details on that below!); here are their demands in full:

+Address the serious problems with the new phone system:
-Create options for adding funds to prisoners’ accounts remotely
-Introduce stop gap measures until then, such as unlimited free calls
-Remove the relationship tax that penalizes prisoners for calling the same number often

To support the striking Niagara prisoners, call the detention centre at 905-227-6321 and press 0 to speak to an operator. You can either express your concerns to the operator or ask to speak to the superintendant, Tom Bradley. Please tell whoever you speak to that you support the prisoners’ strike and want to see immediate, good faith negotiations to meet their demands.

Details about the phones: As you might have heard, the province recently ended its contract with Bell for the phones in provincial prisons and instead hired Telmate, a company based in Texas. The new system addresses some long-standing complaints around cost and ability to call cell phones, but the deficiencies are so serious that in its current form it represents a real worsening of conditions for prisoners.

These issues are also being faced by prisoners in Hamilton and will soon be common across the province. By supporting the Niagara strikers now, we are fighting for the conditions prisoners across Ontario will face in the coming years.

The striking prisoners in Niagara want to communicate the following points about the phones:

+ The phone system draws money from the prisoners’ cantine funds, costing 60 cents for local calls and $2.50 for long distance. Most people are not local in the Niagara Detention Centre, so the cost is comparable to the previous system

+ Neither Telmate nor the prison is currently allowing funds to be deposited remotely for calls. Families were already having to drive to Niagara to drop off money — without being allowed to visit — but now people are burning through it that much faster.

+ Without visits, prisoners are more reliant on the phones. But inexplicably, if they call a given number more than 60 times a month, they face an additional fee of $1 per call. Since most prisoners are making 3-4 calls a day, this becomes a significant additonal tax on maintaining their relationships

The new phone system should never have been rolled out while there is no ability to deposit funds. Telmate’s Canadian subsidiary, Synergy, does not even list Ontario on its list of regions. So far, we have no information on when this will change.