April 22 the city of Oshawa bulldozed the community-led Memorial Garden, which stood in downtown Oshawa for nearly two years. Made by unsheltered community members, the memorial originally started to commemorate those lost to the opioid crisis and drug overdoses. It grew to be a community memorial for anyone lost to drug overdoses, suicide, untreated illness or other ails from poverty and capitalism.

There was a rock garden and a board with names of those lost as well as religious/spiritual icons, photographs, cremation ashes and street art. For some, all they had left was their name in the memorial garden. And the city ruthlessly and without warning bulldozed it. Gone are the memories for so many that had nothing else. This is just the latest attack of gentrification against those most marginalized by capitalism. 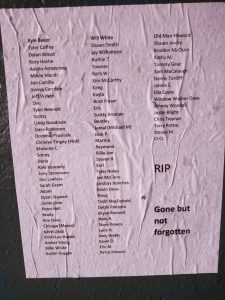 This combined with rising private security and a police presence in the city, especially downtown, inspired us to take action and raise awareness with a wheat pasting project. While the city has a long way to go, even something small like a wheat paste is better than doing nothing. We also hand painted some rocks with anti-CDN logos to drop around the downtown core, we placed the one pictured where the memorial rock garden used to be. The names are all the names we could find from the memorial. We apologize if we missed anyone. 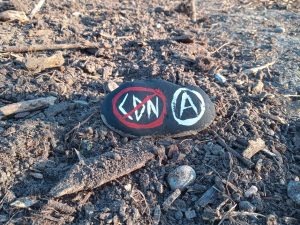 We hope to inspire more community lead direct action and solidarity. The police and private security companies are only there to serve gentrification, the state, capitalists and politicians. They are not, and will never be on the community’s side.