Throughout this past week, some of your friendly neighbourhood anarchists have been going on a sticker and poster campaign in Hamilton, Ancaster, Toronto, Kitchener, Guelph, and Waterloo. Maybe you’ve seen some of the “Blackout Black Friday” stickers and posters urging residents to not shop or work on Black Friday for ten days.

We want everyone to understand that we have the power – not deranged billionaires. The only way to empower yourself and others is directly – without representation.

This past week, two banner drops were held – one at Jackson Square, where after an hour the banner droppers were threatened by security, telling them that they “wouldn’t want to destroy something they worked so hard on” and they “would be calling the police shortly”. So the anarchists packed up and left, but not without giving some of the fliers to the guards. One of the tenants who owned a shop, probably clutching their pearls, called management, who quickly summoned forces of the state. It’s unfortunate that one person can have so much power to be able to call upon security guards and police who will violently impose their ability to make profits.

Another banner drop was held this past Wednesday, on the Southcote bridge near the Ancaster strip malls. This bridge was targeted specifically at rush hour traffic, so hundreds of people could see the message. The banner was ducktaped and left for cops to take down, so it would last as long as possible. This area is a conglomerate of corporations: Sobeys, Staples, Home Hardware, Starbucks, etc. These corporations who continually make profits off the backs of their workers locally and globally deserved to be crushed. Why should any retail worker work harder without getting paid more? This is the reasoning behind the call to action. Corporations lose power when they lose profit, and workers gain power when they take it for themselves.

All of this intersects with the current anti-work movement happening globally. People refusing to work, and prioritizing their lives – without guilt or shame of “not being productive” or “being lazy”. And even if they were being lazy, what’s so bad about that? Our religious Protestant work culture is only beneficial for those that take the fruits of our labour – so many of us have been brainwashed into  thinking not working is bad and deserved to be punished. This punishment comes in the form of police violence kicking you out when you can’t pay rent, beratement from your boss when you’re sick, demands from your teacher when you’re grieving.

We take this past week as proof that our capitalist state will try to violently crush any form of resistance against it, even when it’s in the simple form of peaceful protest.

This Black Friday, use it for it’s original intent – to call in sick and enjoy your time, the way you want to. 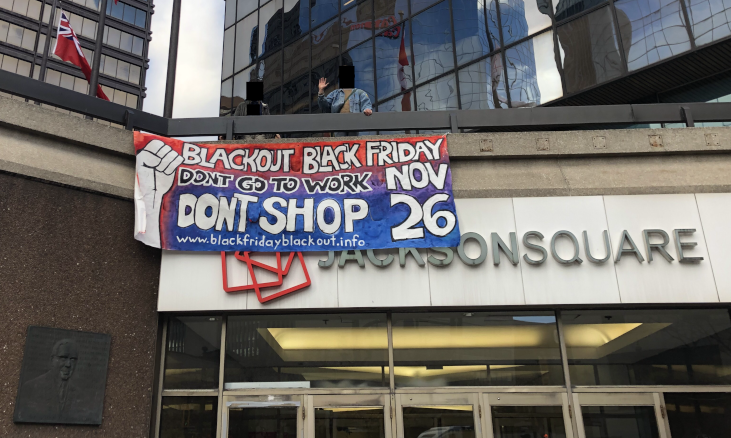