Remember Hamilton Pride 2019? Expecting an attack by christian hate groups and far-right trolls, folks organized themselves to defend pride. When the far right rolled up to Gage Park, we were ready: a giant banner was unfurled to block the haters from the pride festivities, pride-goers of all ages joined in, and we pushed them out of the park. In the following days, five people ended up with charges from that event and its fallout, with the last of those charges only being dropped this year. It wasn’t an easy Pride season for queer and trans folks in Hamilton, but no one can say that it didn’t honour the roots of Pride. We haven’t forgotten that Pride’s origins are in the original Stonewall riots, where trans women, sex workers and poor folks threw down to protect their space from homophobic and transphobic cops. When our spaces are under attack, we show up for each other and do what we have to do to keep each other safe.

This year was the first Hamilton Pride festival since that summer, and the “official” Pride offerings couldn’t have been further from those roots. Pride was to be held indoors, in a convention center, under the heavy surveillance of Hamilton police. It was a slap in the face to those who fought so hard to defend our space in 2019, to keep each other safe while being visible, joyful, and true to ourselves in public.

So a plan was made to have the kind of Pride we dreamed of: a street march and party. No cops, no bigots, nothing for sale. Just queers being loud, rowdy, and together in public. The day went as well as we could have hoped. Over a hundred people showed up in their pride best, with signs and banners, ready to take the streets. After a few speeches, we wove through downtown. Near the doors to the convention center where the indoor pride would be held, people threw up dozens of posters calling out RBC, who were tabling at the event, for bankrolling the coastal gaslink pipeline. There was music, confetti cannons, rainbow smoke bombs, a banner drop and fireworks. We ended in a park next to city hall, where DJs carried the party into the night. 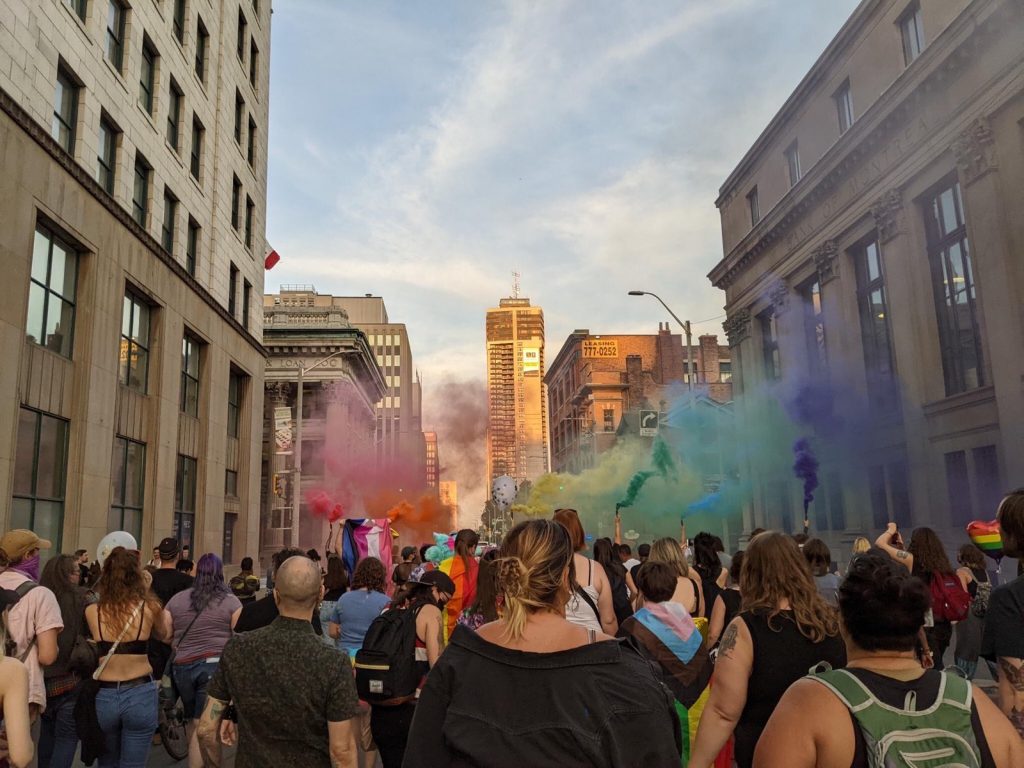 The cops of course couldn’t help but try and intrude on: they brought out the horses and drones, followed our march through the city and lurked around in unmarked cars as we partied. However, with some planning and reassurances to each other that we’d make sure that no one had to engage with the cops if they didn’t want to, we didn’t let them get in the way of our fun.

To me, this couldn’t have happened at a better time. Years of pandemic, and years of repression before that, have somewhat diminished feelings of possibility and opportunity in this city. I’m proud of us for remembering that many things are possible and that we can do a lot together. I hope that folks who came out that night took away a bit of that possibility. That they shared in the reminder that if we don’t like the ways things are, we can plan something better, and that we have the ability to create the spaces we need.