This was our 14th consecutive year of marking New Year’s Eve in Hamilton with noise demos outside our local prisons. This year, we visited the Arrell Youth Prison on the Hamilton mountain before making the traditional stop at the Barton Jail.

We had about 15 people make the drive out to the remote southern edge of Hamilton to set off fireworks for the youth. Youth prisons in Ontario are privatized, so Arrell is run by Banyan, a youth-focused social service agency. But don’t let the fact that they also run summer camps fool you — this place is a prison, complete with razor wire and cells.

There is not a lot of access to good windows at Arrell, but we set up in an area where we had been able to connect with prisoners in the past. We could see a few people inside, but it’s not clear if they were prisoners or staff. We probably need to learn more about the rhythm of the day inside this prison if we want to be sure we are being seen by the right people.

For the Barton Jail, thirty people gathered in a nearby park before heading to the prison. We heard a speech from a member of the Barton Prisoner Solidarity Project. Here are a few choice quotes:

“There has been a prison here for a long time, since 1868. It has always been a symbol of terror and oppression, of the ruling class’ dominance. There was a cemetery on the site until the old prison was demolished and the current one built, in 1978. It held the remains of those who were executed, including William McConnell, the first person to be executed there, in 1876. He was convicted of murdering his landlord during a rent strike. You can see the kind of class terrorism this place represents. McConnell was buried in the south-east corner of the grounds.”

“When we gather outside these walls, it is to say that with or without a marker, those murdered by this place will not be forgotten. And that although they can lock people away, make it so we can’t hear or see them, they are not forgotten. And to remind ourselves that just because a prison has existed for a hundred and fifty years doesn’t mean that the day we tear it down brick by brick isn’t getting any closer.”

Barton’s C wing is empty right now due to construction, so we just visited the east and west sides of the prison. Some tags and paintbombs accompanied the massive number of fireworks, and we could see prisoners banging on the windows and making noise back to us. There was no visible police presence, so it felt pretty chill,  although we had a couple of friendly fire incidents with fireworks that we need to think more about how to avoid next year. 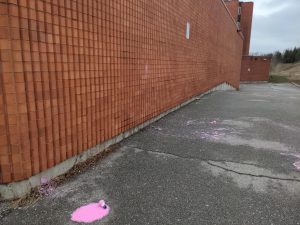 Folks from the Barton Prisoner Solidarity Project went out the next day with their phone number banner to try to connect with people inside who saw the fireworks. Our struggle against prison and all forms of domination on the outside is complimented by direct solidarity with incarcerated people who are struggling around their conditions. Another year begins, and the social war never stops.

Fire to the prisons!

-Some anarchists in Hamilton