From Anarchist Network of Toronto

As part of the International Day Against Police Brutality (March 15th), members of the community put up posters around major intersections university campuses in the downtown area last night. 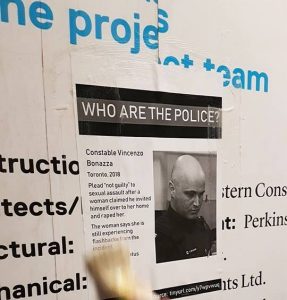 The images are self-explanatory and show clear examples of situations where police have been empowered to commit heinous acts against members of the public, and most were able to do so with little or no legal consequences.