“Oh wow, we’re just, like, taking up the street,” I hear the thirty-something guy behind me exclaim to his friend as we take off. “Holy shit this is awesome,” his friend replies. Slightly more experienced folks from the crowd move instinctively to the side and back to stop traffic as we move out of the park and onto the road, heading towards Kingston’s main commercial street. The sun is shining for May Day for the first time in recent memory and we had a larger-than-usual crowd of around 200 lining up for free hamburgers and veggie dogs at our annual pre-march barbecue.

The group that has chosen to take the street is about 75 people, based on my cursory glance backwards. Normally I’d do a better count but it was my turn to take the front this year and our banner is surprisingly heavy and unwieldy. It’s a decent turnout for Kingston, but really not much larger than last year’s march, which took place in a lightning storm of epic proportions. It’s a different crowd than what we got in the rain though – less usual suspects and more kids and people I don’t recognize. People are making good use of the sidewalk chalk that we’ve given them, writing various slogans on streets, sidewalks and buildings as we move. There are children drawing circled A’s in intersections and a guy I’ve never seen before writing “banks suck” at every bank as we pass by.

This event is a bit of a slog to organize, and it forces us to take on roles that we might not choose to take if we lived in a bigger city. I’ve often wished that somebody else, some left-wing activist type maybe, would come out of the woodwork and stage a takeover of our organizing collective so that my friends and I could just show up at the march and have some fun. Maybe we’d even try to escalate it a little bit by Kingston standards, progress from chalk to spraypaint perhaps, or add in some kind of action component like an office takeover or a banner drop. But nobody ever steps up to organize the thing, and I’m too glad it exists to let it go. It does feel a bit boring for all of us in the collective in the leadup, and even the event itself can feel a little ritualistic, like we’re doing the same thing every year. May Day is the one time each year in this town, though, where people reliably take the streets (not the sidewalks or a public square) with a message that I can get behind. It’s also the one event I’m involved in that reliably brings out strangers and folks who are new to showing up for a radical event. We joke about how there’s a new wingnut every year, and that’s true, but there is also clearly someone each year who is pushing their comfort zone just by being here. There are also people who I see every year at this event but don’t see much of otherwise. I find it inspiring that we organize this event offline, choosing instead to get out and plaster the town with posters on poles and flyers in mailboxes, and I think we actually get more new people because of it rather than less. I hate Facebook so that aspect brings me a smile every year.

I’m not against ritual if it has a point. It feels right somehow, as the spring emerges each year, to come together with a bunch of other people who share a distaste for the way the world works and do something that we’re not supposed to do, no matter how small or inconsequential that transgression is. “Real” holidays are bound up with religious connotations and forced togetherness with biological family and other people who, no matter how much I love them, I did not choose. May Day, though, is all ours. We get to call in sick and take the streets and mark another year of whatever kind of struggle we’ve chosen to engage in. Sure there are lots of people here who I don’t share much with politically, who I would not call close comrades and who at other moments I might find myself in conflict with. And sure, sometimes its depressing to think of how little we’ve accomplished since the last time we walked down this road. But all the same, for those of us who want to live our lives in some kind of community of struggle, it’s nice to build in our own holidays, our own rituals, our own ways to mark the passing of time and to give ourselves excuses to gather.

Half way through the march things almost get interesting as a local Indigenous organizer takes the mic while the rest of us hold an intersection. Passers-by in this busy part of town pause to gawk as she speaks about pipeline politics, traditional ways of life and allyship. Two unreasonably angry trolls emerge to hurl the usual troll-y insults. Glimpsing the word “freedom” on our banner one guy screams “Does freedom mean the freedom to be stupid? Huh? To block a public road?” They’re not the most original, but one of them walks right into the crowd and a few people look visibly tense. The speaker continues on, though, and the trolls, not knowing what else to say, just stand in the middle of the crowd flailing their arms, hoping perhaps that their pathetic presence will somehow intimidate us or persuade us that our actions are, as they point out, “moronic.” One lady fronts like she’s going to pick a fight with the speaker but predictably scurries away up the street when nobody steps off the sidewalk to back her up. We move on. 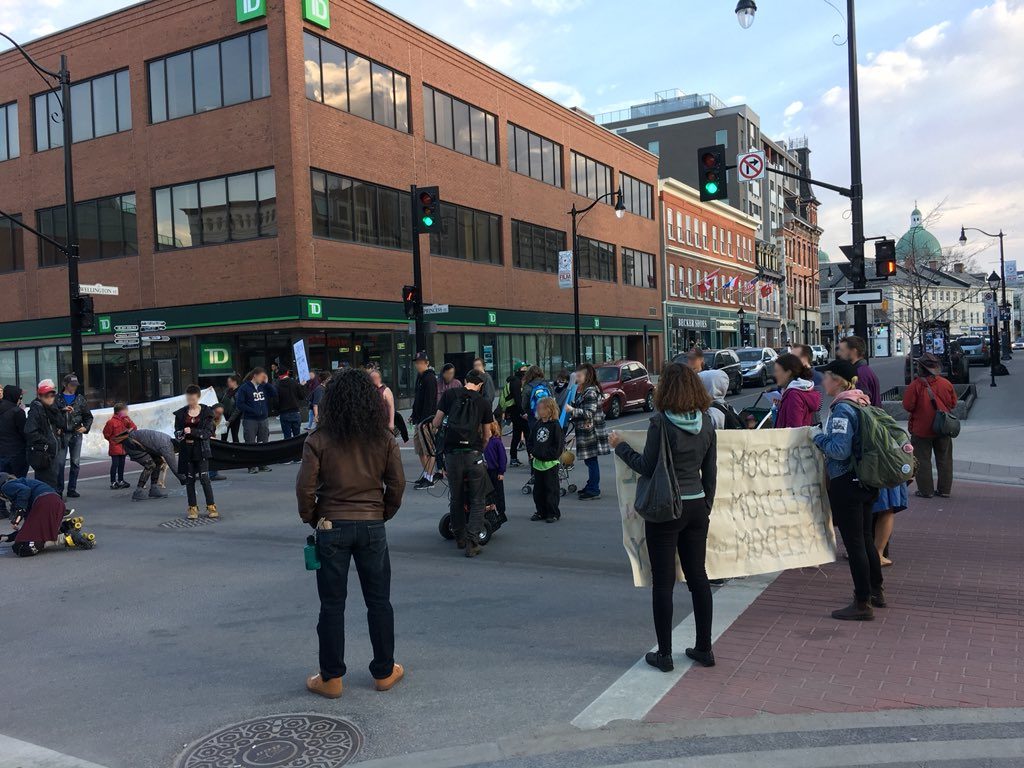 After a few such stops and about a 40-minute march, we end at another park. This area of waterfront is slated for a huge wave of development and we invite people to leave messages about how they feel about that as they disperse. A bunch of them move to do that and we hang around, listening to a bit more of our playlist and chatting with some of the attendees as they hang messages on the fence of a falling-down “heritage” building that might soon become a luxury residential building.

The cops didn’t show up this year, for the third year in a row, in what we think is an intentional strategy to not engage unless somebody calls them. We promote the shit out of this event with posters all over the city and they clearly know that it’s happening. I’m pretty sure that a good part of why they don’t come anymore is that the march itself has never been confrontational with anybody but them, so if they don’t come they can safely assume that it will be peaceful. Of course I have feelings about that, about how reliably smooth and pleasant this protest is. Of course I’d love it if a crowd this large and this diverse would instead pick some kind of a fight, or target some symbol of power for destruction. But nobody is standing up to move it in that direction, and I don’t want to for a couple of reasons. It doesn’t seem strategic for my own life to break more laws when I’m so publicly associated with the event, and if I don’t organize it then I know it won’t happen at all. It also doesn’t seem like the rest of the crowd shares my friends’ and my desire for something more. For a lot of folks it’s enough right now to walk on the road, to push back cars, to yell at people, to draw some impermanent message on a building. That was me at one point too so I don’t want to deny them that opportunity or diminish how great it can feel to do those things when they feel rare and special. Instead I’d rather remind myself that those transgressions are fun and real, and that it’s no more or less ritualistic than breaking the same windows every year anyway. If the march gets more creative next year that would be great, but if it doesn’t I still appreciate it as an annual touchstone for those who attend. I also see how it changes in more subtle ways from year to year depending on what else is going on in terms of local struggle. I do worry about boredom, but mostly I trust that we can let the event grow and change as the context does without giving up the sense of tradition that it brings.

When we get home, we unload our barbecue stuff and banners and have some friends over for leftover burgers and to watch twitter feeds and riot porn from other cities. Another annual small town ritual, and I don’t feel bad about it at all. We chat about plans for actions and events coming up, and somebody proposes an ambitious project idea that we all agree to talk about next week. I send some appreciative text messages to a few people who stepped up to block streets or speak on the mic today, and then I go to bed happy. I’m feeling pretty pumped about the day and how it went, but I can’t pretend I’m not also feeling relieved that the organizing for it is over for another year. Another May Day in Kingston down, and a pretty successful one at that. 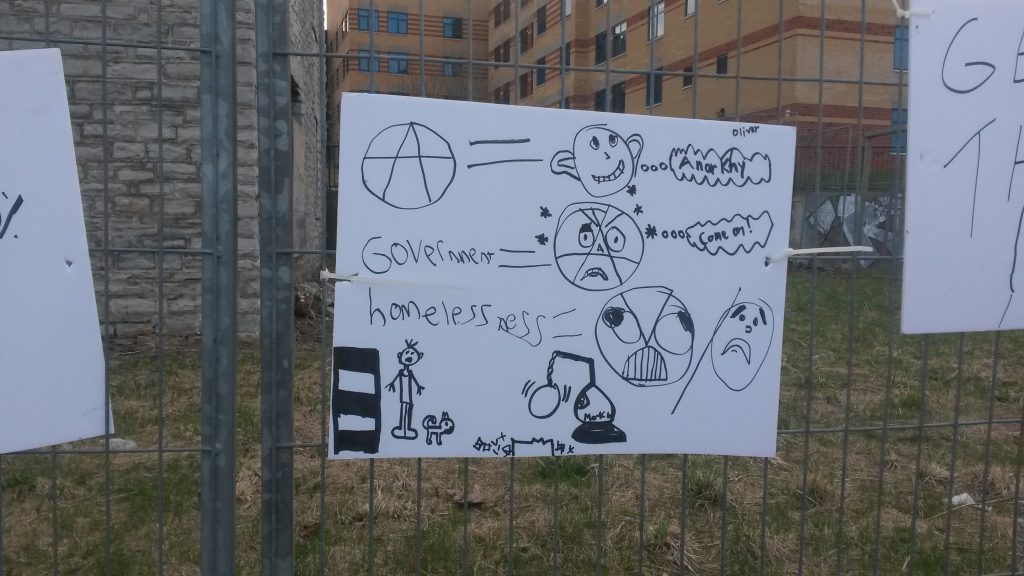 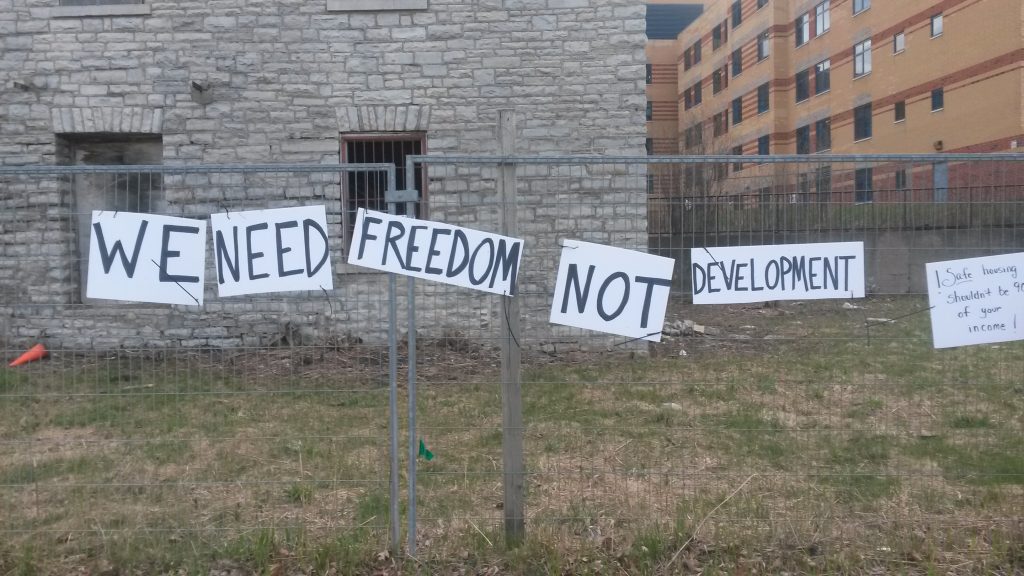