We are welcoming organizations to endorse our call out! To endorse and offer support, email gdc.torontoiww@gmail.com

The date WCAI has chosen for their hate event is the one year anniversary of when white supremacists marched with torches through University of Virginia campus. One day before the anniversary of the large-scale civil conflict we now call Charlottesville. We have reason to believe WCAI chose this day on purpose — and we cannot take this threat lightly.

Toronto Against Fascism and the Toronto IWW General Defense Committee are calling for ALL HANDS ON DECK to defend against WCAI and their coalition of white supremacist and Islamophobic groups, including the Proud Boys, Northern Guard, Canadian Combat Coalition, Three Percenters, Soldiers of Odin and La Meute. [NS: For what it’s worth, La Meute contacted us to say they are forbidding their members from attending this event]

Not only is WCAI flying in from Calgary, but regional white supremacists are traveling from all across Ontario and Quebec to show their hatred — not only against Muslims and refugees, but for anyone else who stands in their way.

We must come together in a show of solidarity across the left spectrum as a UNITED FRONT to protect and defend against these fascist monsters! 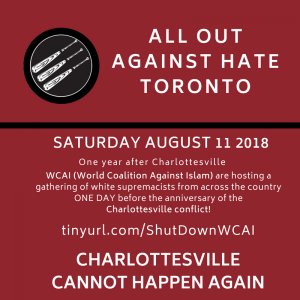