This is a report on the anti-fascist mobilization against the Worldwide Coalition Against Islam (WCAI) in Toronto on August 11, 2018. It’s written by an individual and is not intended to be comprehensive – for a fuller picture, see reports from Anti-Racist Canada here and here, the Toronto General Defence Committee, No Borders Media (source for the photos), and the video from THREAT.

The story began when the WCAI, which is based in Alberta, called for an “epic rally” in Nathan Phillips Square in Toronto. WCAI prides itself on putting “political correctness in the trash where it belongs,” and by that they mean embracing the racist label, openly referring to Muslims and immigrants as ‘sewage,’ and calling for extreme violence against anti-fascists. Several racist rallies have been unable to take the streets of Ontario in recent months due to anti-fascist mobilizing, so the WCAI claimed they were flying in from Alberta to lead a coalition of the most violence-prone groups (Proud Boys, Soldiers of Odin, Northern Guard, the Canadian Nationalist Front and the Canadian Combat Coalition) and “take back Toronto.” It was called for August 11th, one year after Charlottesville. 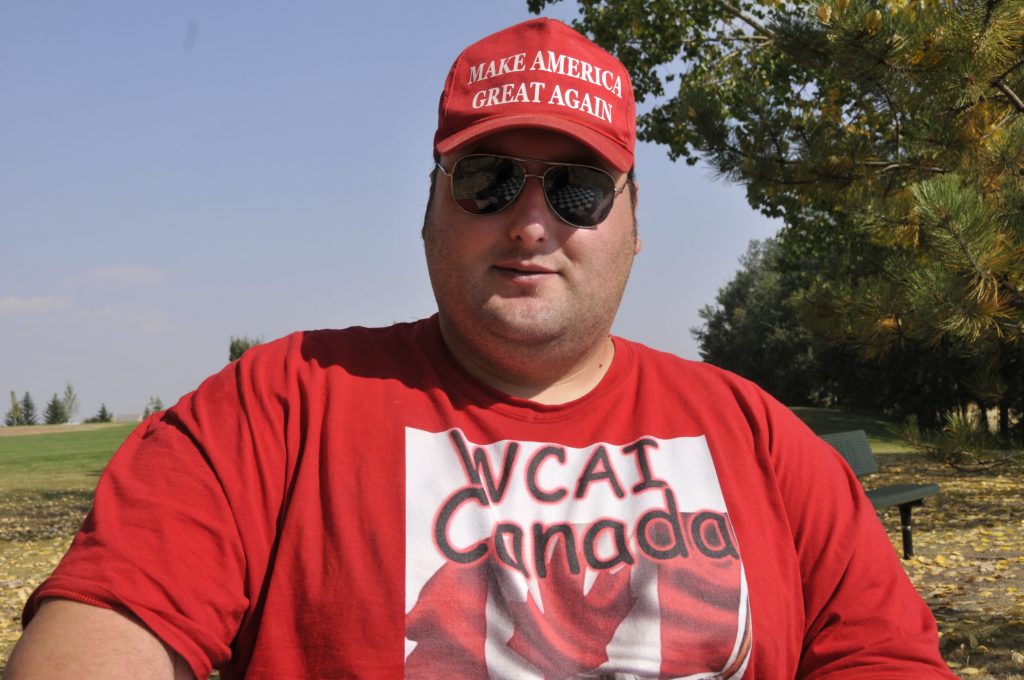 Given the increased potential for violence, organizers in Toronto reached out to anti-fascists across Ontario and Quebec. The IWW General Defence Committee and Toronto Against Fascism (RCP) called for a militant demo. The folks at Anti-Racist Canada got hold of an interview between white nationalist Ronny Cameron and WCAI leader Joey DeLuca and published an expose of their machinations, including an idea for a torch-lit march. Whoops. ARC also dug into their archives to find various screenshots exposing the WCAI crew for their explicitly white supremacist and Neo-Nazi leanings. It had the desired effect. Journalists published stories about the WCAI’s plans and intentions. A coalition of anti-racist orgs and labour unions called for another counter-demo in the square (mostly the “love not hate” variety). Click-tivism successfully targeted the WCAI’s crowdfunding campaign, their webpage and their social media accounts.

The pressure was on, and racist groups started dropping out. Joey DeLuca wrote a now-infamous piece called “Why we can’t cuck out August 11th” basically pleading for turnout at his rally. Then, the leader of the Jewish Defence League, a far-right zionist organization in Toronto with funding and muscle that often supports ‘patriot’ rallies, publicly denounced the WCAI for being anti-Semitic and for choosing the anniversary of Charlottesville for their rally. This would prove to be the death blow for Joey’s rally, who canceled his flight and called it off the next day – wait sorry, “postponed.” He publicly claimed he was canceling it because of a conflicting event in the square – a Bollywood Festival that was also canceled. Seriously, we couldn’t make this shit up. And the infighting has only escalated from there. 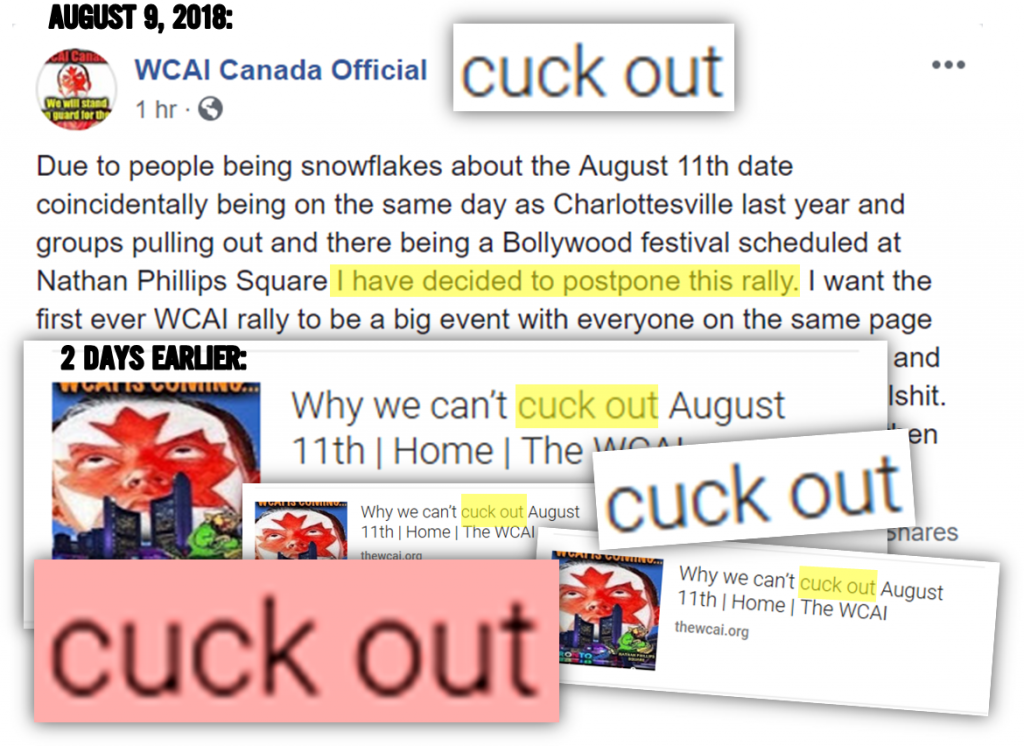 Plans for a counter-demonstration were transformed into plans for a victory rally. Then, Sandra Solomon, a Toronto-based Islamophobic Youtuber Catholic supremacist, stepped forward and declared that the rally would continue and that she would run it. This was no longer looking like “Charlottesville North,” just regular old wingnut Toronto.

On August 11, hundreds of anti-fascists and anti-racists converged in Nathan Phillips Square, and were met by a large and aggressive police presence. Cops attempted to erect metal barricades around the counter-demo, but militants were smart to fight back for control of the entrances into the square. It worked. This led to a standoff with police in the hot sun, while antifa was provided a steady supply of freezies by the “Snack Bloc.” Every so often, a lone white supremacist who didn’t get the memo about the canceled rally would show up, provoke the crowd by saying something like “White Power!”, and then get punched several times before being run out of the square. A couple far-right photographers were spotted and also dealt with fairly efficiently. A photographer with the Toronto Sun, a right-wing trash paper, had his hat scooped and some journalists are trying to make a scandal out of it.

Finally, Sandra Solomon was spotted by scouts a few blocks away, several hours late to her own party. Several crews departed the square and surrounded her. Turns out her rally was a whopping 3 people. A large contingent of police escorted her to the building adjacent to Nathan Philips Square. Interestingly, by watching Sandra’s own livestream, we see that the cops escorting Sandra are very unhappy with having to protect this small ass group against hundreds of fired up anti-fascists, tell Sandra she’s not allowed to use her megaphone, and ask Sandra’s friend to refrain from singing an out-of-tune O Canada (“You’re making our jobs harder.”) The cops tell Sandra that they can negotiate with her, whereas provoking the anti-fascists is like “poking a hornet’s nest.” They are genuinely afraid of us in numbers. So let’s continue to be hornets. 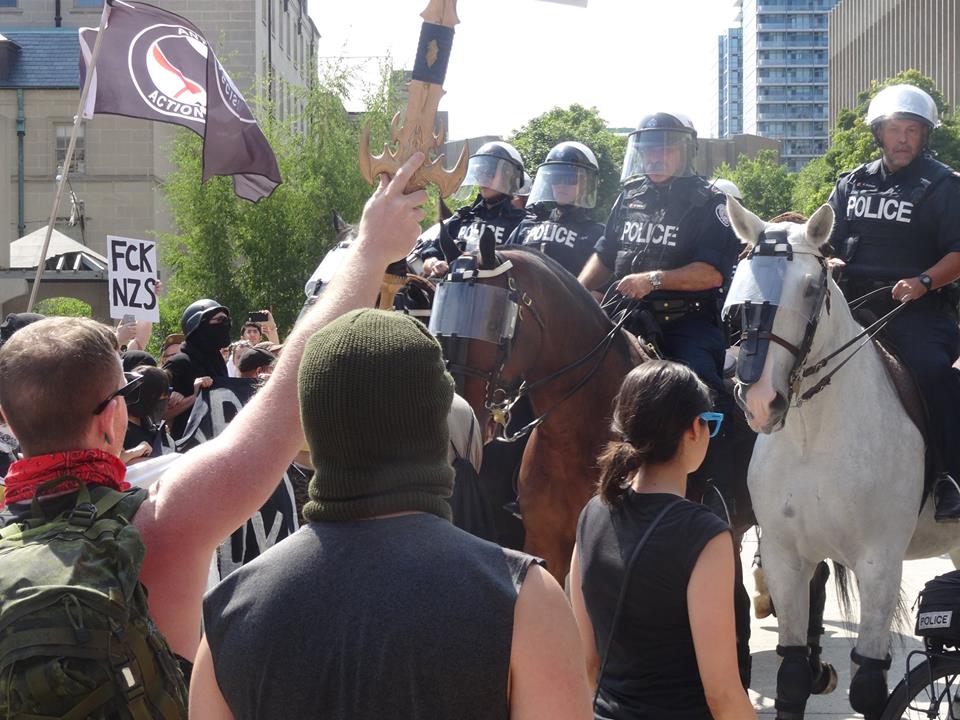 After being escorted into the building, Sandra insisted that she be allowed to rally. The cops reluctantly let her into the square, where her and her minions lasted literally 10 seconds before running full speed back inside, providing us with this very enjoyable video. Sandra then told her livestream viewers that they were cowards and traitors for not showing up, and declared this would be her last rally. One can only hope.

After declaring victory, antifa marched to 52 division to demand that police release the 2 arrested comrades. En route we got word that Sandra was spotted going into the Eaton Centre Mall, so we made a stop. This resulted in a fine spectacle of several dozen masked hooligans leaning over the railing at the mall and taunting the Islamophobes with various profanities, as shoppers looked on in confusion. We then proceeded to the police station only to find out that the arrested had already been released.

Overall, this pathetic WCAI attempt to “take back Toronto” galvanized anti-fascist networks across southern Ontario and Quebec, earning us important tactical experience holding space together and facing off against the police, and providing a huge morale boost for future organizing. Thanks, Joey! At the same time we see a substantial portion of the anglophone far-right destroying itself over the usual questions of white supremacy and anti-Semitism. While we should remain vigilant against the rise of the far right, as anarchists we should also continue to engage critically with anti-fascism and not lose sight of our goals – but these are questions for another article. Tonight, we allow ourselves to enjoy a victory.