In a desperate attempt to influence the recent Quebec elections, La Meute has been popping up in the last few weeks with small, decentralized actions. Though the mainstream media has been giving them far too much attention for their size, the extreme-right group’s actions haven’t gained much popular support, in stark contradiction to their leader Sylvain ”Maikan” Brouillette’s slogan: “40,000 members, 40,000 votes”.

It’s within this context that, on the 15th of September, Steeve “L’artiss” Charland (Maikan’s potential rival) led a “mobile protest” which was, in reality, simply a bunch of cars driving around with La Meute flags or stickers. The meet-up for the dozen or so La Meute members was Oka, right next to the Mohawk community of Kanesatake. Upon their arrival, members of the Kanesatake community mobilized to kick them out, subjecting them to boos and insults as they left, and in so doing, refusing to allow their community to be used in the way the extreme-right group have been attempting to use them during the past few months.

«Hey! Get out! Hey, you’re not passing by the reserve either.  Get the fuck out of here!  Get the fuck out.  And they’re not going up this way.»
– A Kanesatake resident speaking to La Meute on September 15, 2018

A video of these events has already been viewed over 50,000 times and shared hundreds of times on Facebook. Some La Meute members used the comments section of the video to spew their racist, colonial hate. A user named “Barb N Bryan Wolfe” took the prize for disgusting comments against indigenous people (image 1). These comments included: “Kanesatake needs to be quarantined,” “This is why we had to fuck you idiots up in ’90,” (referring to the Oka standoff), and calling the Mohawk community “racist Peieces (sic) of shit.” 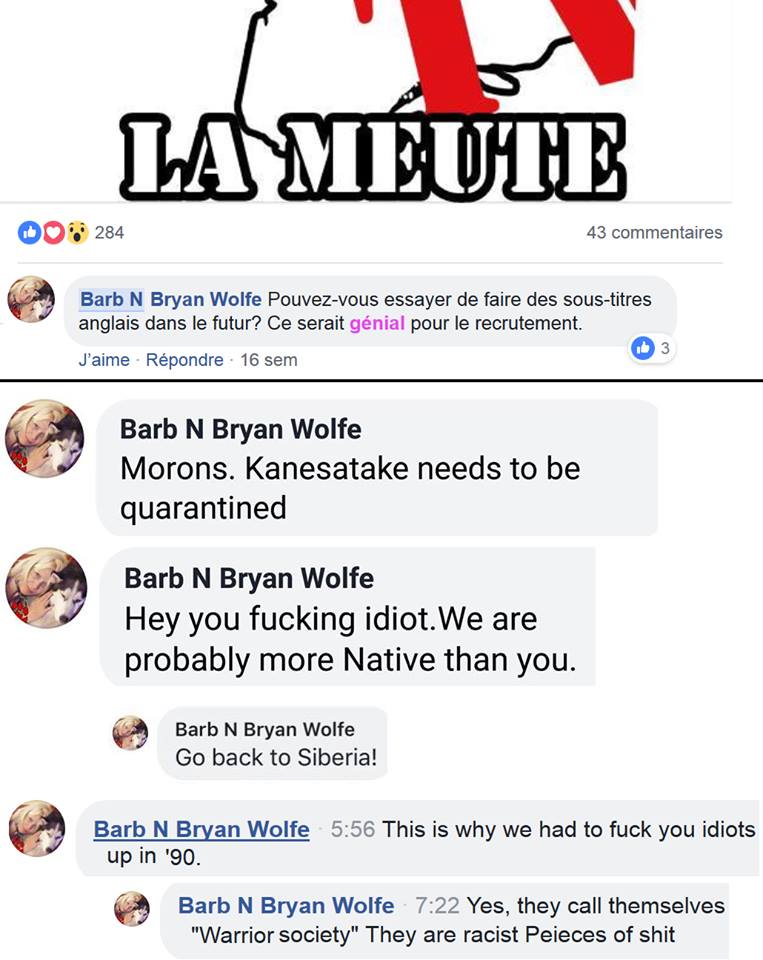 It turns out that this Facebook account is owned by Barbara Edwards (also known as Barbara Wolfe) (image 2), known for organizing an islamophobic protest in Toronto in March 2017.  Bryan Trottier is, in fact, her boyfriend. He has been using the Barb N Bryan Wolfe account to regurgitate his islamophobic hatred and to organize racist events in Ontario. Bryan Trottier is the “Commandant” of the CDN Wolfpack (image 3), the English-Canada branch of La Meute in  Ontario, which currently operates independently from La Meute in Quebec. It also turns out  that Bryan not only uses his girlfriend’s account but also fake accounts under the names of Joshephine Murphy and Zora Xeno. 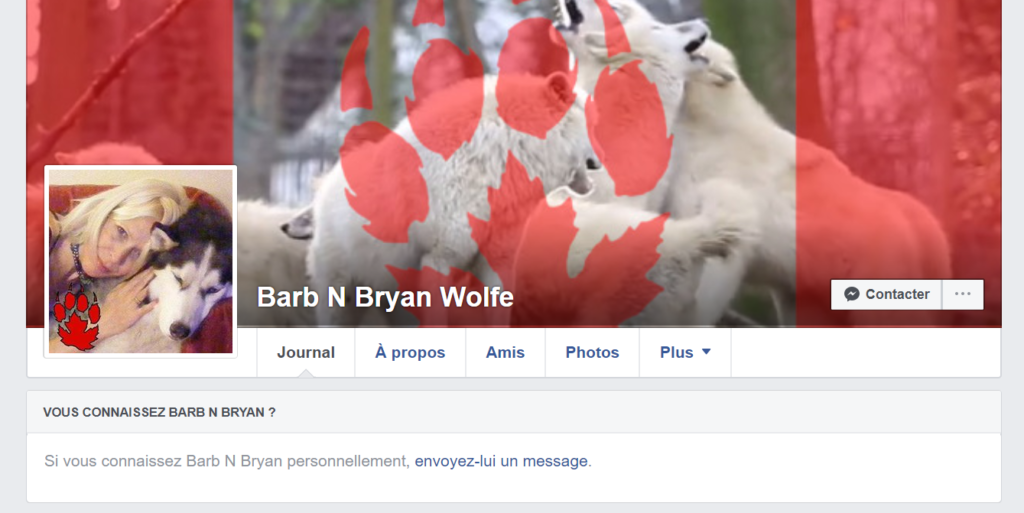 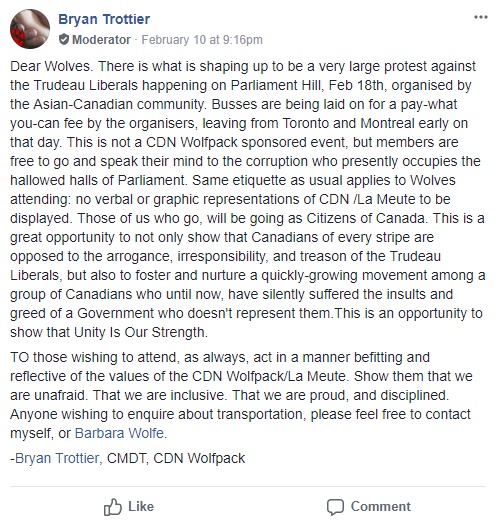 This is far from the first example of Bryan Trottier’s disgraceful behaviour. 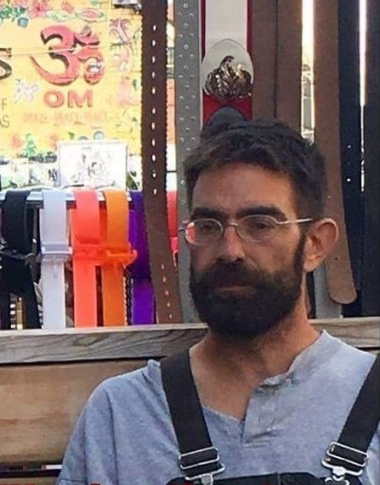 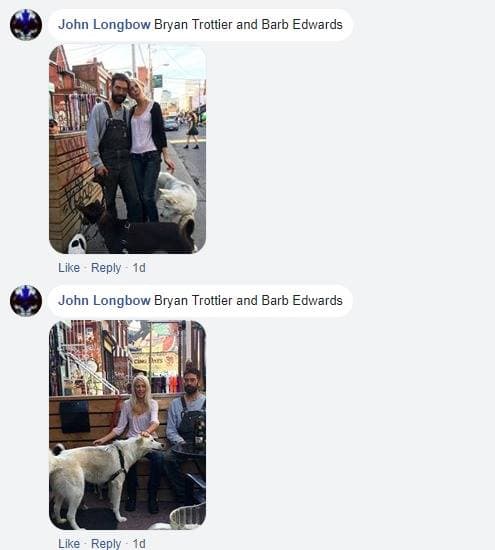 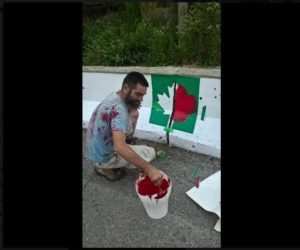 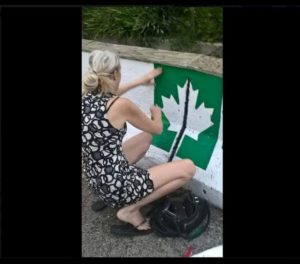 Last June, we published an article on the false accusation of sexual assault orchestrated by a right-wing troll who was using the name “ZoraXeno”. This false accusation, shared by alt-right videoblogger DMS amongst others, was rapidly debunked and denounced.  Like we said then, despicable attempts to employ anonymous accusations of sexual violence won’t keep us from believing victims and survivors in general.

In July, another fake account named “Joshephine Murphy” came out with another false accusation against a member of the pro-union and anti-fascist music group Union Thugs.

Once again, it was denounced as a completely fabricated story, while reiterating support for survivors and feminist struggles against sexual violence and sexism. (image 4-5-6) 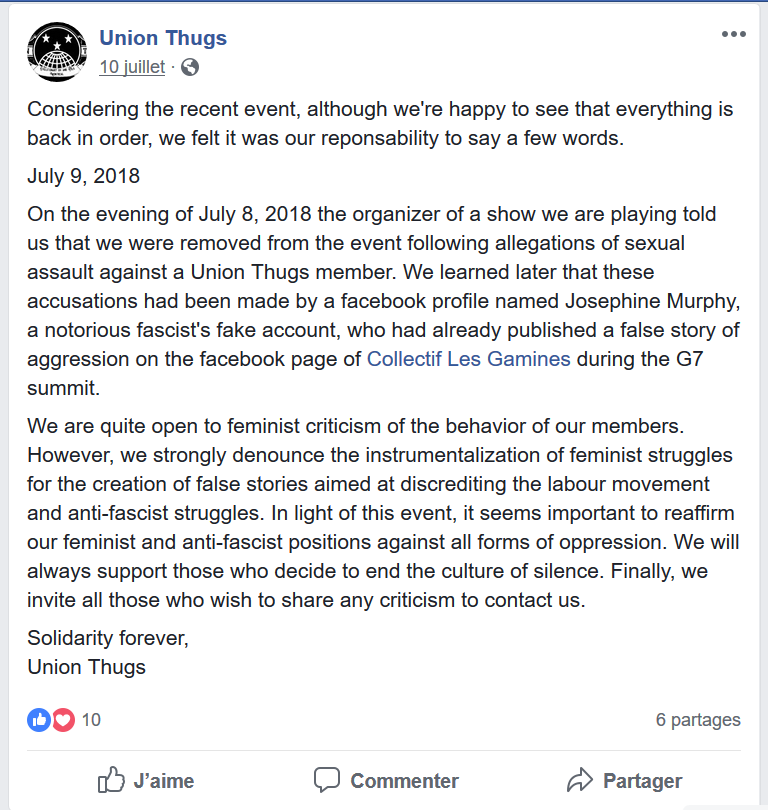 Music group Union Thugs denounces the false accusations and the misuse of feminist struggles to undermine anti-fascist work, while expressing support for the battle against the culture of silence. 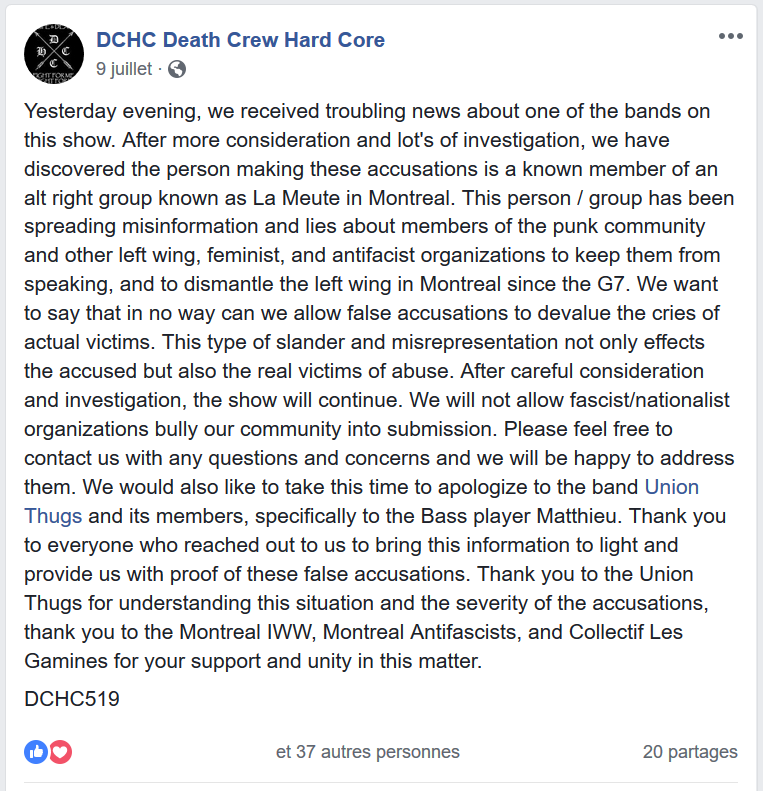 Music label DCHC, which was organizing a show in Ontario with Union Thugs, corrects misinformation while reiterating their support for survivors who anonymously denounce sexual violence.

In the most recent false accusation against Union Thugs, the Joshephine Murphy account didn’t even bother to pretend to be a left-wing organizer anymore, as we can see in image 7 with the “anti-communist” logo which refers to the Pinochet-era assassinations. In any case, after the harassment of multiple left-wing Facebook pages, the Joshephine account has finally owned up to being “Bryan.” (Image 8) 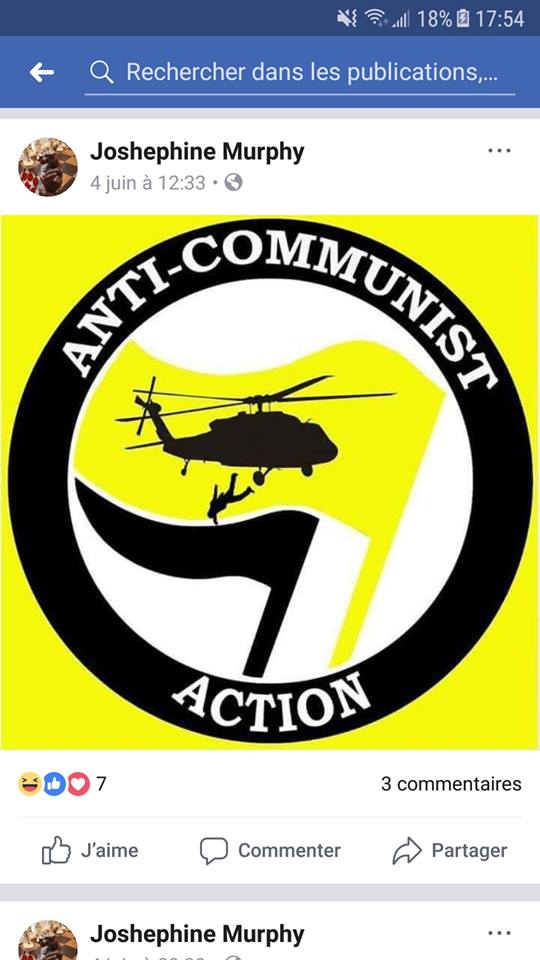 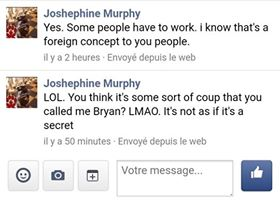 He doesn’t hesitate to proclaim himself a La Meute leader in some of his comments (Image 9). Here we can also see that Murphy  is part of the Canadian Wolfpack secret Facebook group (Image 10) : 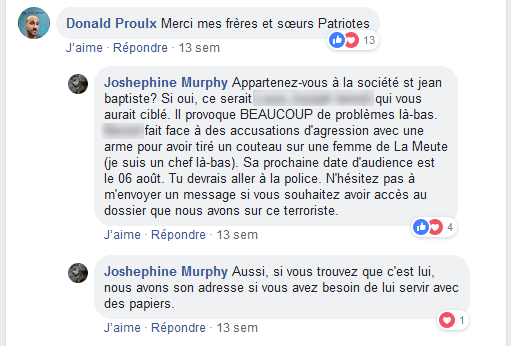 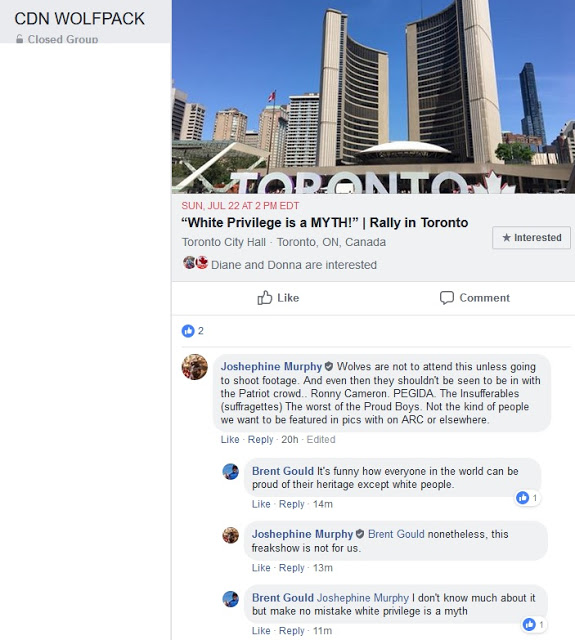 Note that Bryan Trottier used both accounts simultaneously to intimidate a radical group from Ontario in the summer of 2018: 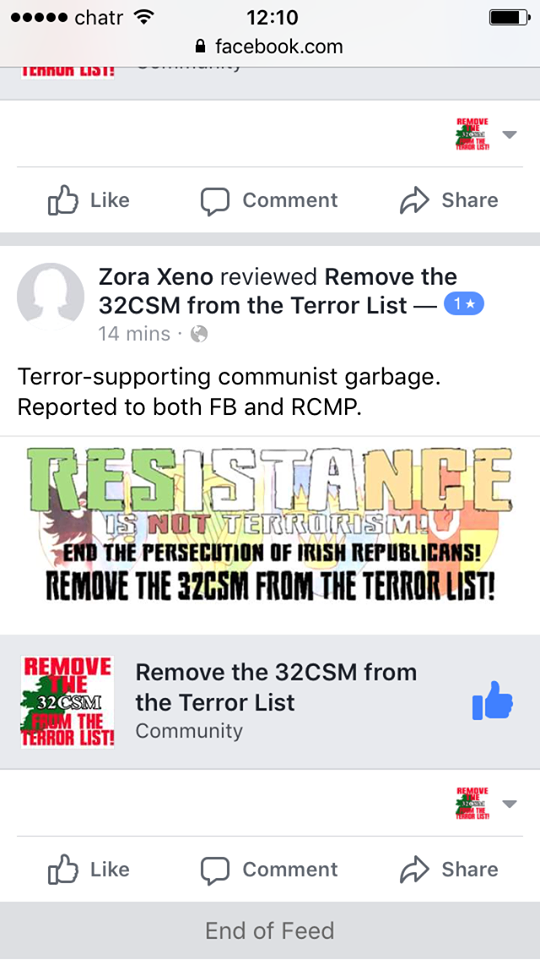 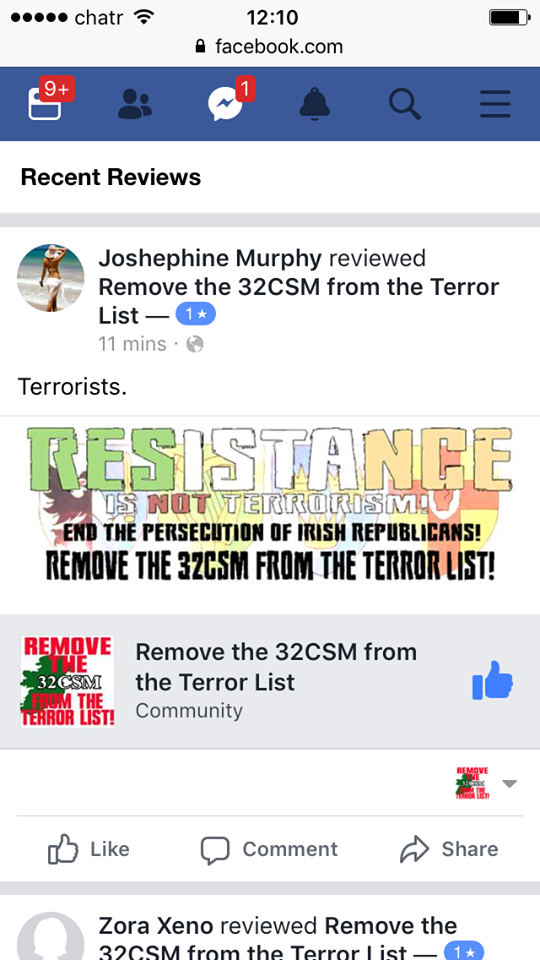 Long story short, Bryan Trottier, aka Joshephine Murphy, aka ZoraXeno, aka Barb N Bryan Wolfe, isn’t some random individual (or group of individuals) but is actually the head of the extreme-right CDN Wolfpack group. Up until this past September 15th, theWolfpack was Quebec group La Meute’s sister organization, organizing islamophobic protests together. Despite their recent split, the head of Quebec’s La Meute group (Sylvain ”Maikan” Brouillette) reminded everyone on the La Meute public Facebook group that “La Meute and CDN Wolfpack will continue to work together closely.”   (September 15, 2018).  At the time this article is being written, the CDN Wolfpack sign-up page was still hosted on Quebec’s La Meute website (image 13). 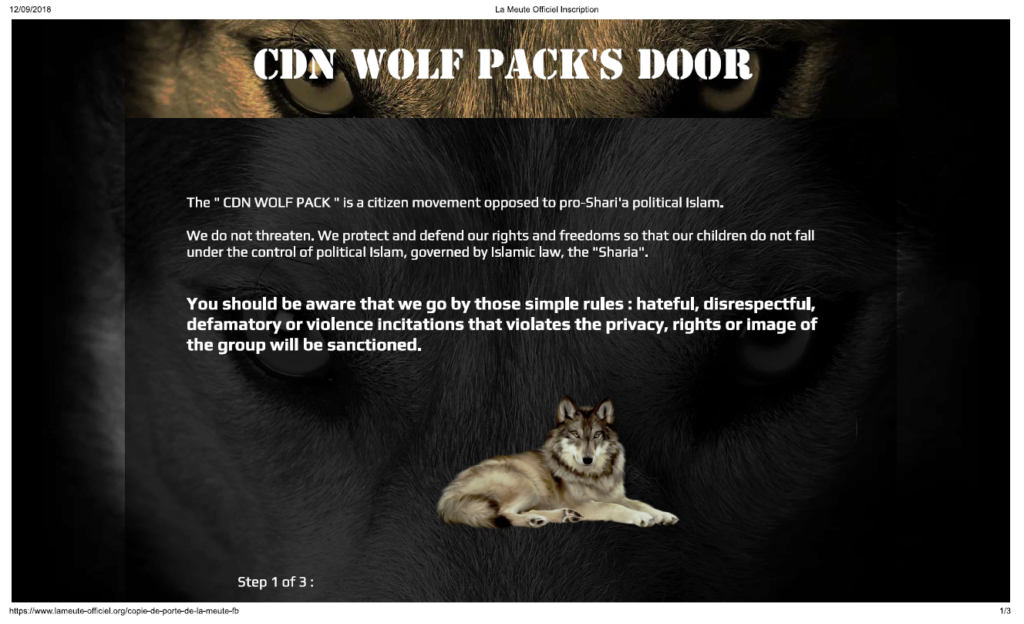 Both deeply islamophobic and racist groups say they want to protect “western values” (and white western women) against Islam. They frequently employ the concepts of equality between women and men to sanitize their hateful anti-Muslim ideology.

The multiple denunciations of sexual assault within the leadership of La Meute, their hatred of the headscarf (and consequently Muslim women), and their numerous attempts to put forward false accusations of sexual assault in an attempt to discredit feminist struggles against rape culture prove over and over their misogyny and antifeminism.

In conclusion, we reaffirm that the biggest danger to our values – feminist, antiracist, antifascist, and in staunch opposition to colonialism – are the Bryan Trottiers of the world, and racist organizations like La Meute, rather than new immigrants with their languages, cultures and religions.

3 thoughts on “Bryan Trottier: the racist, misogynist leader of the English-Canada branch of La Meute”