From Anarchist Network of Toronto

Ants showed up yesterday to provide some sabotage to an alleged ‘yellow vest’ rally at Nathan Philips square. We dropped a banner over the proto-fascist trash that read “IMMIGRANTS AND REFUGEES WELCOME, RACISTS NOT”.

For two weekends running, racist scum have rallied in Toronto under the guise of ‘yellow vests’ with two main talking points: climate denial and xenophobia. It’s apparent that the movement in France is contested territory between the far right, and our international comrades. However, here on Turtle Island, the ‘yellow vests’ are primarily the same xenophobic groups like Northern Guard, Soldiers of Odin, III%ers, CCC, and the rest of the garbage who have been propagating hate on our streets.

Antisemite and white nationalist Faith Goldy made an appearance as well. For us ants, it doesn’t matter what costume the fash put on, we will be there. The same way as the proud boys are using the term Western chauvinists to stand tacitly for “white supremacist”, the vests worn by xenophobes is an attempt at veiling and softening the language of white supremacy.

Some of our comrades did a great job by also wearing yellow vests and handing out anti-racist literature as a way to let the public know that the vests are a contested territory here too. For the ants, we stuck with black masks and black clothes. It seems these yellow vest rallies will continue to be a thing, stay tuned to our page for more! The more of us that show up, the stronger we can be with kicking this shit out of Toronto! 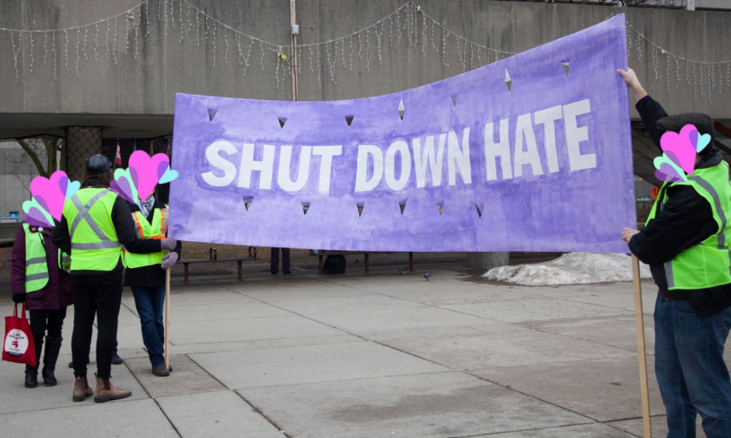