By an editor of North Shore Counter-Info

About a month ago, we at North Shore received an unusual email from an “executive concierge” named Sarah about a single photo in a single article that we re-posted back in December 2018 from the Hamilton Tenants Solidarity Network.

The article was released on the tail end of a long and bitter rent strike in Hamilton and details the harassment of tenant organizers by the landlord and their lackeys at CLV Group. The photo in question depicts Regional Property Manager Selim Dedej informing tenants that they are loitering in their own lobby. In the background is a cardboard cutout of CLV CEO Mike McGahan dressed like Trump alongside a speech bubble reading “We’ll build a WALL and make the TENANTS pay for it!”, referring to the outrageous tactic by CLV to build a wall to block access to the apartment lobby in a pathetic attempt to prevent tenants from congregating in their own building. Anyway, here’s what Sarah had to say:

Hello, I am contacting you on behalf of my client, Mike McGahan of CLV Group in regards to a photo of him on the following page of your website … The fourth photo depicts an unkind and unflattering photo of Mr. McGahan and he would like to request its removal from your site. Due to the slanderous nature of the photo, my client feels that the picture is violating his privacy. I am kindly reaching out to you to ask for the photos removal. If you are unable to comply we will be forced to take further action.

As you can imagine, we get a lot of unsolicited hate mail and threats from strangers, sometimes we get a good laugh and then we trash them. But this one was a bit curious given that the article in question was long-buried in our archives by the time we got the message, but hey, sometimes the wheels of the “executive concierge” move slow, right?

Today, we received a follow-up email from Sarah, asking us about the “status of this inquiry.” So we decided to put the question to you, dear readers. Do you think the depiction of Mike is unkind and unflattering? Should we care, given that Mike runs a corporation whose business model is systematically displacing poor and working class tenants through renovictions and above-guideline rent increases? Or maybe he’s still upset about the protest at one of his houses in Ottawa last August?

Let us know what you think in the comments! =) 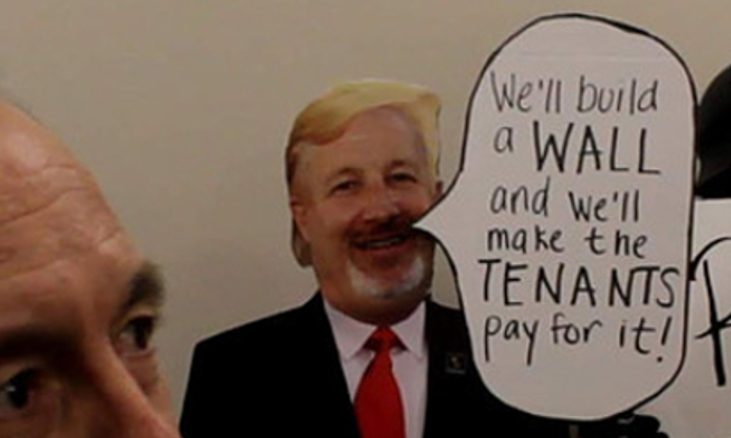