Fascists in Kitchener-Waterloo had a rally today to celebrate Chris Vanderweide’s homophobic attacks on Hamilton Pride. I put on my hot pink war shirt and took my horse down to twirl a rainbow flag at them.

Chris showed his face for all of five minutes (I missed it!), while an assortment of about 15 other white nationalists (mostly from out of town) occupied a back corner in front of Kitchener City Hall, distributing apples and granola bars to themselves. About 6 police and 4 city hall security protected them for the three hours they were there.

Food Not Bombs was also doing their weekly food serve in front of City Hall, with signs showing support for 2SLGBTQ+ folk. Their tables were thronged for a bowl of delicious vegan curry, while the right-wing crowd stood intimidatingly in front of their own table, yelling at counterprotesters and attracting no one.

The only person I saw the fascists distribute to was a single homeless man with a shopping cart, who was actually directed by police away from the Food Not Bombs table to the fascist table.

We also met some members from the Men Without Hats! ??? They were super rad, and joined in to help shout down the homophobes. The Safety Dance is now confirmed antifascist anthem.

The homophobes eventually walked, being escorted into City Hall with their police retinue.

Grateful for and inspired by Kitchener Food Not Bombs, the KW punk scene, and the people of Kitchener for coming together in community self-defence and pushing fascism out of their space.

Egg-and-milkshake fans will also be disappointed to learn that an unsuspecting Proud Boy had a water bottle dumped on him, which was unfortunately filled with cold water and not cat urine. 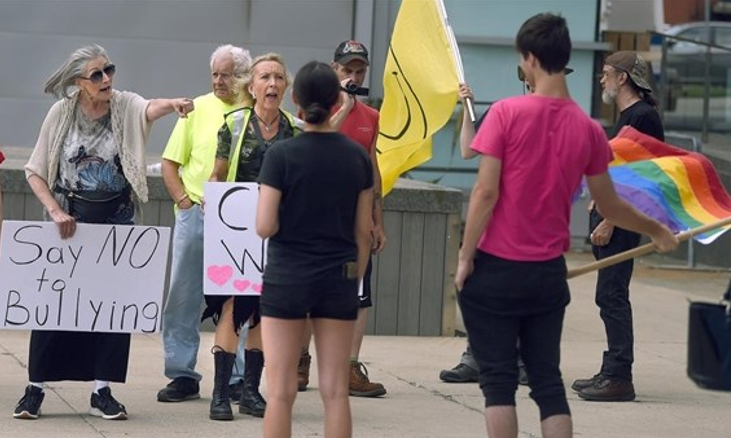 1 thought on “Pride attacker Chris Vanderweide missed his own rally: a Reportback”