Recently in Guelph, an animal testing lab was broken into and a video of animal conditions was posted online. Tags were left claiming it for the Animal Liberation Front. A few days later, several banks were defaced with anti-capitalist graffiti. Although no communiques for these actions were submitted to North Shore, we find them interesting and choose to republish information about them. Text and images below are lifted from mainstream sources.

For those who are interested, North Shore Counter-Info offers a secure and anonymous place for publishing communiques about actions that fit broadly within our politics and making them visible to a wider audience.

Their Screams Will Haunt us Forever: University of Guelph Animal Testing Lab Broken Into and Vandalized, Video Released

Images released by the OPP on April 30 show graffiti left at the University of Guelph’s Swine Research Facility on Arkell Road.

A video posted to Facebook has raised concerns about the way animals are treated at the University of Guelph’s Swine Research Facility on Arkell Road.

In a press release sent out April 30, Wellington Ontario Provincial Police say the facility was entered sometime between 3 p.m. on April 27 and 6:30 a.m. on April 28.

During the incident, police say graffiti was spray-painted on the walls and a tractor, consisting of “profanity and slogans in support of animal rights.”

A video was posted to the Facebook group “KW Animal Save” (https://www.facebook.com/kwanimalsave/) at 1:52 p.m. on April 28, days before the press release was sent out, claiming to be from the people who entered the facility.

On the morning of May 3, 2020, members of the Guelph Police Service discovered that six banks throughout the City of Guelph had been vandalized with graffiti. 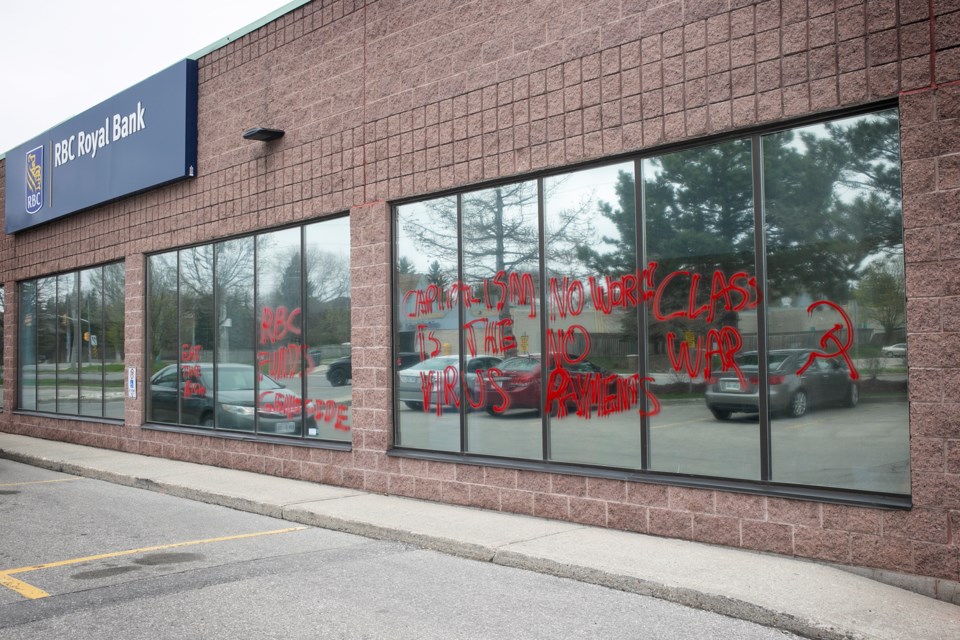