Show Header Sidebar Content
Twitter Feed Reddit
Anonymous submission to North Shore
On Saturday February 8th, 2021 a group of about 50 people gathered at Meridian place in Barrie ON to protest the recent police beating of a 20 year old man for skateboarding. Some held flags, others held skateboards and signs reading “Skateboarding is not a crime” and “Defund the Police”. We were met with many honks of support from passing cars and trucks. Police vehicles drove by many times, but were met with heavy boos from the crowd.
The beating of the young man reminds us that even small cities like Barrie are affected by the brutality that is imposed by policing. A brutality that will not end until the systems that inflict it are dismantled.
WE MUST ABOLISH THE POLICE. 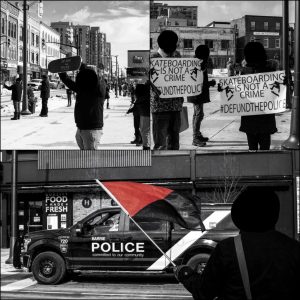