Anyone who lives in Hamilton knows that JSquare is truly a temple of precarious jobs. Maybe you’ve put in your hours sweeping yellow skittles off the theatre floor or selling cigar boxes at one of the telemarketing firms; maybe you have a friend who pushed data plans at one of the cell booths or slung Mooseheads at the Honest Lawyer. Whatever your experience of Jackson Square, you can perhaps imagine how satisfying it might be to march with a crew of 40 radicals through the mall, spreading May Day cheer and working class solidarity to all those stuck working on this International Worker’s Day.

This year’s May Day began two months prior with an attempt at coalition organizing. It was a real possibility, but for the presence of a small yet committed group of authoritarian communists (working under different banners of the Revolutionary Communist Party) whose behavior during the meetings rendered the word “solidarity” meaningless. Thus proving once again that there can be no solidarity with those who seek power over us, those who worship the murderous dictators of history, those who follow party lines instead of their own ethics. And so anarchists went our own way, calling for an anti-authoritarian & anti-capitalist march on our own terms. We would gather in Gore Park with the Unions to demonstrate our solidarity, but leave thirty minutes afterwards.

At 4pm, we wished the labour march farewell as they marched west on King St. Those who yearned for something more than a slow rolling street march held back, blasting radical hip hop from a stroller and holding a black banner that simply read “Fuck Ford”. We watched with glee as all twenty of the cops who had been surrounding the park followed in the wake of the union march, leaving us unaccompanied. By 4:30 we had more than 40 people gathered and huddled up to discuss our plan. With little fanfare and a booming stereo we set out across the main thoroughfare of Hamilton and directly into the mall.

Security stood dumbfounded as the mall came to life with people cheering, handing out flyers, dancing, and shouting “Happy Mayday” into the stores. We moved quickly and loudly through the mall until we came to the Standard Life Building where we stopped to send a message to the thirteen floors of government offices and telemarketing companies rising around us. A local IWW member spoke about the Hamilton Chamber of Commerce slashing workers rights, the WSIB betraying injured workers, and reminded us that we can never rely on worker compensation systems or employer policies to protect us when we are in vulnerable situations.

We know that the only meaningful way to force these bastards to respect our existence in this brutal world of work is to talk to each other and confront our bosses. It’s also important to identify our enemies for who they are, and target them in large groups where they feel safe, which includes their homes and offices”

We emerged from the mall with no arrests or tickets, cheering and roaring with joyful laughter, just in time to join up with the Union march. We took the street with them and unfurled a second banner, this one 30 feet long that read: “May Day: No Bosses, No Prisons, No Borders, No Cops”. With great satisfaction we took in the stunned faces of cops who realized the mistake they had made.

As we marched across York Blvd we heard from a comrade from the Sex Workers Action Program (SWAP):

We do not believe our liberation will be reached through a permanent position within capital, to then be exploited in more efficient ways. We do not want to be legalized. We are against both economic exploitation and state regulation of economic exploitation. The more legitimized our labour becomes by the state and capital, the more we are forced to work. We want an end to criminalization, an end to work, and an end to capitalism altogether. We want to prompt conversations about how sex workers can organize material solidarity and care networks that build community while also undermining the state’s ability to hold us hostage in its many ways.”

The march ended at a local bar with free food and music put on by USW 1005 & the Hamilton District Labour Council. We were greeted  by the labour march organizers and all cheers-ed to a rowdy Mayday over a pint (or a soda). We were honoured to carry on the long-standing anarchist tradition of May Day, causing some shit and wearing our politics proudly. If nothing else, this year was a good reminder that we don’t have to organize with false friends. 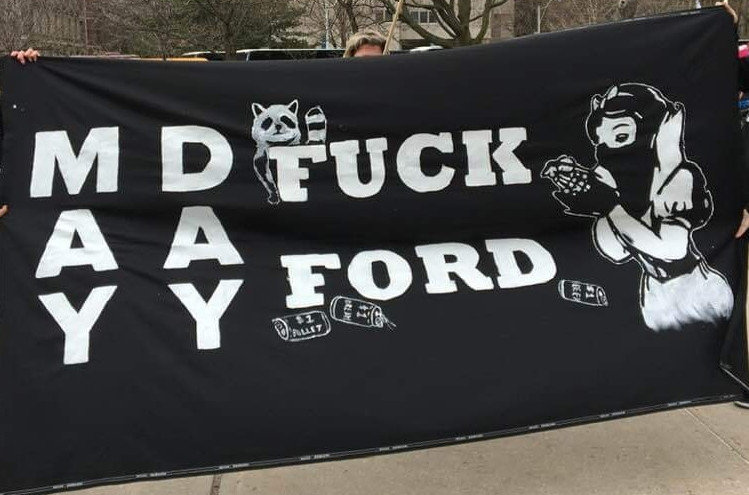 8 thoughts on “Hamilton May Day: Causing some shit and wearing our politics proudly”