On the night of April 30th, the night before May Day, International Workers Day, some brave person heavily tagged Queen’s Park with spraypaint. “Fuck Ford” was written at multiple points and “Murderer” was painted across the statue of John A MacDonald. These acts didn’t get a lot of coverage, so I thought I’d post them here to express full solidarity with them and also with the person who was arrested and charged with carrying them out.

Actions like these remind us that opposition to Ford’s cuts can’t be merely rhetorical – to everyone who took part in one of the “general strike” actions on May Day, let’s keep finding ways to push things further and go beyond the limitations democracy and its police place on our opposition. Because regardless of whose in power, this system will always protect the walls of power over the needs of human beings, and values obedience more than health, education, and dignity.

From the corporate press: 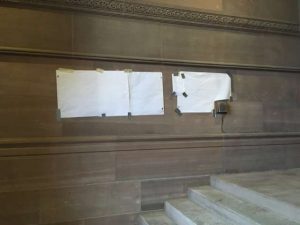 “The messages that were sprayed on the historic building and a Sir John A. Macdonald statue included profanities and were directed at the government of the day, Gordon said. Sources told our vulture journalists that the messages were “f–k Ford” and “MURDERER,”

“Queen’s Park has been the scene of multiple demonstrations this week as the Ford government implements controversial changes to many areas, including autism funding and health care. Gordon said the building was vandalized at about 3:50 a.m. “We’ve called in a specialist to come in and clean it,” Gordon said.”