On Monday February 17th ~60 determined people occupied the Thousands Islands Bridge at the Canada/US border near Kingston for about 3 hours. We are a mix of indigenous and non-indigenous people responding to the call from Wet’suwet’en land defenders to rise up following violent RCMP raids to force a pipeline through their unceded territory. Our energy is particularly high thanks to the strength and resolve of the Mohawks at Tyendinaga who have forced the closure of Canada’s busiest rail corridor for 13 days now, creating a crisis for the federal government and an “emergency for the Canadian economy.” We were also excited to hear about the Rainbow Bridge occupation in Niagara Falls on Sunday.

There was a public call to prepare for a day-long “field trip” and gather at Skeleton Park in Kingston, where speakers connected the dots between indigenous sovereignty, climate change and state violence that have moved so many to action in this moment. The surprise destination was revealed in the park, and most of the crowd decided to board the school bus heading to the bridge. Those who felt uncomfortable or unprepared were treated with respect and encouraged to join a call-in campaign at another location downtown.

Our plan was simple – a small team waited on Hill Island (on the south side of the bridge) for word that the main group had reached the toll booth at the base of the bridge on the north side. As the main group passed the toll booth, giving donuts to workers and asking them to halt traffic onto the bridge, the south team dragged pylons onto the road and held a banner, bringing northbound traffic to a halt. Both teams allowed cars on the bridge to clear out before closing it completely. 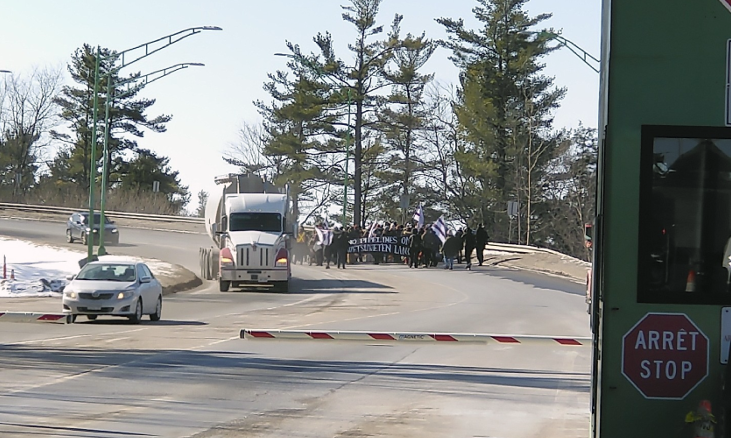 On the approach to our destination where the guardrails narrowed at the base of the bridge, one cop drove towards us announcing that anyone who continued past him would be charged. We stuck together and multiple people started chanting “flow like water” as we walked around the cruiser, which was a nice moment of bravery to experience with the crowd. When we arrived at the bridge, folks quickly set up a portable sound system, snacks and hot drinks, a bathroom tent (a pop-up hunting blind with a DIY bucket toilet inside – fairly inexpensive and comfortable!), and a burn barrel in the centre of the road. Some folks took a moment to pray, offer tobacco, or just feel aware of their bodies and the earth and sky around us. Then we settled in for a few hours of chanting, eating snacks, drumming, linking arms, and staying warm. Police closed the bridge from the north side almost immediately after we arrived, so we had virtually no interactions with drivers. The OPP brought in a liason team who occasionally walked over to ask us how long we would be there and what sorts of vehicles we would let through. It was nice to know that we were keeping some OPP busy out here instead of hassling folks beside the rails at Tyendinaga. 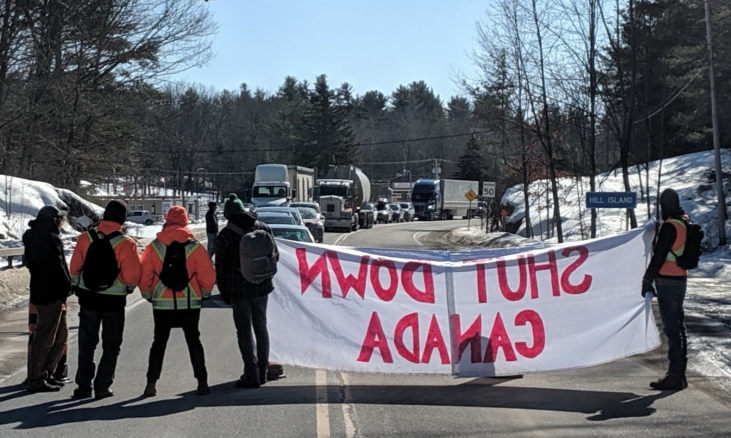 The ideal plan for the south crew was to close the road, wait for the Bridge Authority to arrive, allow them to take over the base of the bridge, and then fall back to the main group. That never happened – in fact, no authorities appeared on the south side until the very end, so we had to hold our position and engage with drivers for several hours, which could have gotten dangerous. Many of the islanders and drivers were respectful and supportive, but a handful of them were very angry and threatening, and at one point a group even started organizing to drive through our blockade. Thankfully we held our ground, did our best to de-escalate, got some reinforcements from the other side when things heated up and no one tried to push through in the end. Like our first experience at the rail crossing in Kingston a few weeks ago, we learned that we can’t rely on the authorities to even follow their own safety protocols and to always plan to keep ourselves safe. After 3 hours were up, a large contingent from the main group showed up to pick us up (a truly heartwarming sight to see), and we all marched back together across the bridge, regrouped, and marched back to the parking area together. 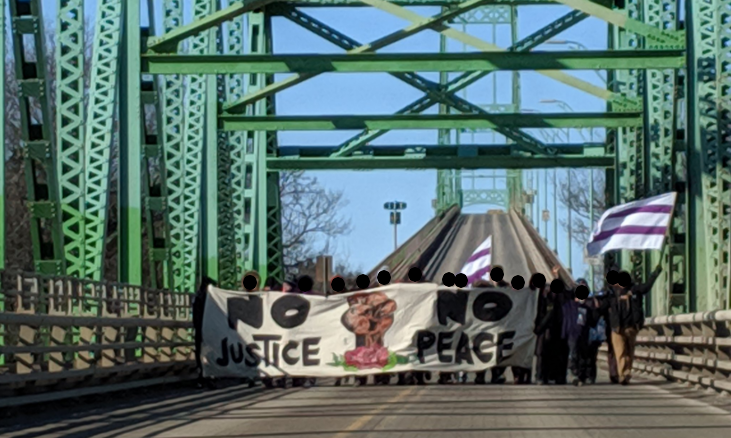 The occupation was relatively short, and this was the first time most participants had ever done anything like this, but it had a sizeable impact. The border crossing was closed for much of the afternoon, and commercial transports were backed up for kilometres, eventually causing police to close Highway 137, sections of the Thousand Islands Parkway and the 401 exit to the border. It’s our understanding that the closure also caused a massive backlog at the Ogdensburg-Prescott international bridge 80km east. 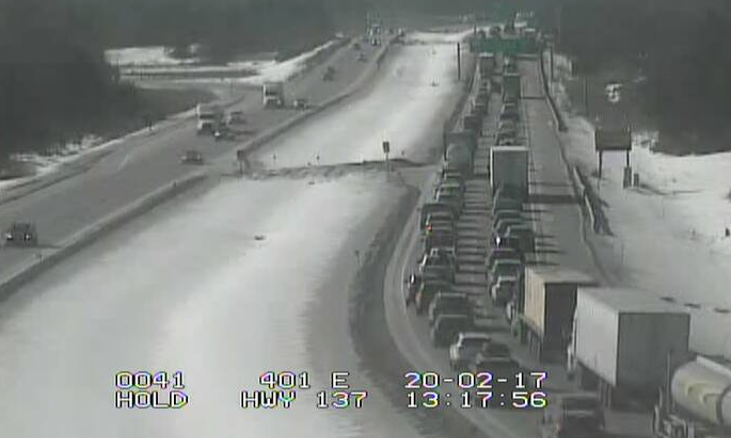 Two weeks ago when the idea to close this bridge was first floated, it seemed impossible. But the present momentum outpaces us, and people’s courage and willingness to act right now continues to exceed our expectations and challenges us to think bigger. Tens of thousands of people are participating in actions across the country right now, including many that intend to create economic disruption and political consequences for decision-makers who think they can impose a pipeline on the Wet’suwet’en people at gunpoint and get away with it. It’s clear that they vastly underestimated the level of solidarity that exists all across the country right now, and it’s our turn to see how much space this momentum can create for imagining something better than the current trajectory towards intensified colonial extraction and climate catastrophe.