On Thursday February 27th, Kingston locals – settler, immigrant, and Indigenous alike – gathered on the CN mainline in Kingston at the Gardiners Road overpass to continue to pressure the Canadian state in solidarity with the Wet’suwet’en hereditary chiefs.

The rail bridge was taken at 8 am and CN was immediately notified. Flags were flown, banners were hung, a fire was lit for warmth and, as the word got out, supporters began to arrive!

Indigenous drummers kept our hearts light and our spirits high as we held our space with a sense of community, sharing warm food and drinks, laughter and dance. 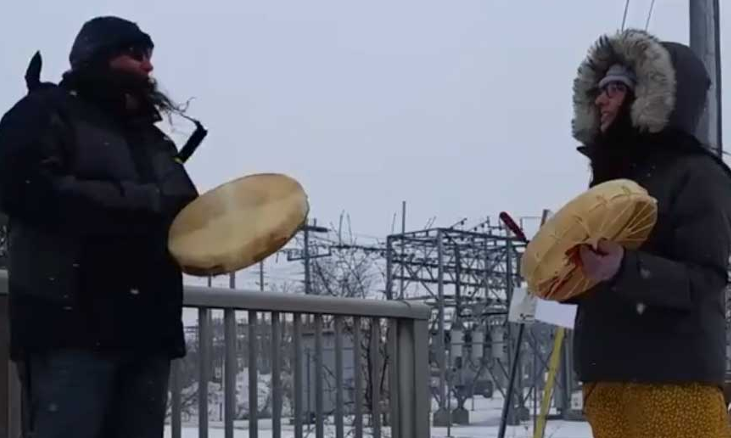 The cutting wind and blowing snow did nothing to cool the spirits of all who joined and occupied our space and position of solidarity. We knew we were acting alongside thousands of people across Turtle Island who have stood up for Indigenous sovereignty.

Police were also early to show up but stayed off the bridge – our strategy of establishing access control points at various entrances to the bridge with people and pallets helped keep us safe. We asserted our desire to act in solidarity, and our lack of interest in escalating any situation with police. The action continued in peace for the first 90 minutes or so, until the police invoked the province-wide injunction against rail disruptions, and prevented new arrivals from joining through our entry point. Happily, the bridge has many access points that folks were able to use without risking conflict with police.

As police forces grew along the first point of entry, we were told a train would be coming through despite our presence and that we would all need to vacate the area as they would be enforcing the injunction. Maybe because the group was largely settlers, no trains attempted to come through, unlike at Tyendinaga the day before where Mohawk warriors were nearly run over.

We remind everyone to consider the increased violence and criminalization of Indigenous people in these actions and understand that this underscores the very need for settlers to be on the tracks and in these actions.

Unfortunately, but expectedly, the police continued to amass and escalate, threatening arrests if we did not vacate.

We had no desire to shift from economic disruption to physical conflict, and several Indigenous people present expressed the importance that any escalation with the police would not be seen as an act of solidarity with them. This helped inform our collective decision about when and how to leave. 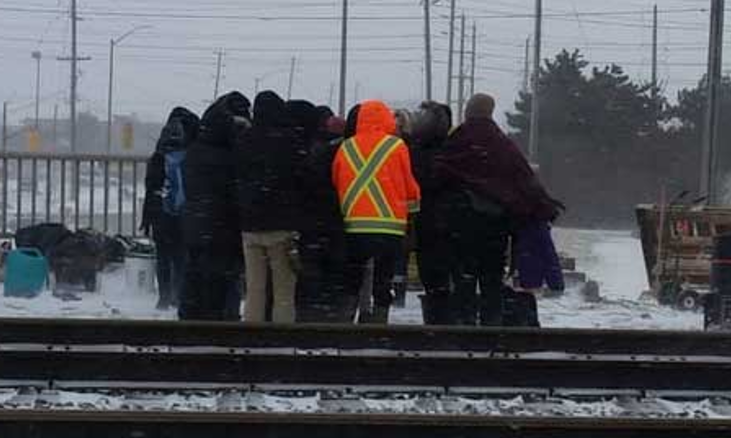 We continued to assert our presence well after the initial police demands, and eventually negotiated an end time that felt effective and reasonable to us. We left without any arrests, all free to organize similar actions in the future.

We were proud to have played a part in the disruption of colonial Canada’s business-as-usual, blocking rail traffic through the busy Toronto-Montreal corridor for 3 hours.

Our spirits remained high as we left together and warmed up over a community meal.

Thanks to all those who came out to make this action happen and to all those elsewhere who continue to act in support and solidarity!

We hope this demonstrates possibilities for solidarity action that anyone can take.

Those of us who are settlers have learned from the Kanyen’kehá:ka (Mohawk people) about our Two Row Wampum responsibility to do our own organizing in our own majority-settler community, and to hold our government to account.

We encourage all to continue to keep the pressure up until the Wet’suwet’en demands are met.