A Canadian fascist organizer and live streamer has been recruiting men into fascism for the past two years — all under the cover of anonymity.

A new investigation by the Canadian Anti-Hate Network has revealed that the man who hid under the name “Aquila the Eagle” is Ben Mockler, a personal trainer and owner of the Nova Signum gym on Ottawa’s Rideau Street.

An outspoken supporter of not just National Socialism, a cult created by a former Knight of the Klu Klux Klan, a fixture in niche fascist media, and an organizer of an in-person meet-up group in the capital, his beginnings in the movement were very different.

Mockler, who also uses the name Ben Burke, started off fairly quiet during his early live streaming appearances, usually laughing along with more confident and coherent speakers. Unlike the host of The Eagle’s Nest, the masked Oklahoman streamer John Fashcroft, “Aquila” is unseen — a disembodied voice with a French Canadian accent.

A graduate school dropout, labourer, and longtime personal trainer, Mockler has been developing his presence. No longer just a background character in a niche stream screaming about the machinations of unseen Jewish forces, Mockler is now an organizer and recruiter for movements steeped in ideas of not just racial supremacy, but the spiritual superiority of the white Aryan man.

Recently opening Nova Signum gym – Latin for “New Standard” – on Ottawa’s Rideau Street, Mockler has spent over a decade helping people with their physical fitness. In multiple interviews and footage of a presentation, he states he has a Bachelor of Science in Osteopathy though it is not known from which institution.

Mockeler has also claimed, in self-promotional videos in 2018 and 2019, to have a Master’s in Athletic Therapy. However, in videos released to Mockler’s business page shortly before the end of 2022, he clarifies he did not submit a thesis and therefore did not finish the program.

Mockler’s public social media history before 2017 is sparse and tells the story of a young father and athlete trying to establish a personal brand. His posting of memes referencing well-worn conspiracy theories became more frequent in 2018. By 2019 and 2020, these narratives progressed to explicitly naming Jewish people as arbiters of a global plot to subvert western nations and European culture. 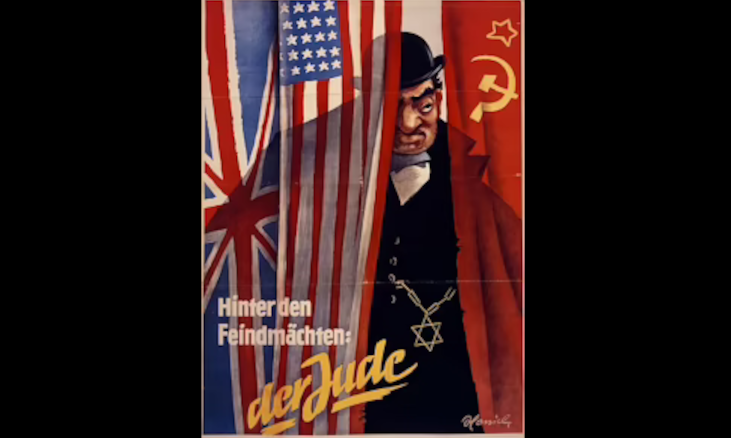 “(((Pedophiles))) have already written Ontario school curriculums so please don’t tell me these people aren’t making laws that expose our children to evil on purpose,” he wrote in 2020 on his Facebook page. The three parentheses around the word pedophiles is common internet parlance to indicate Jewish people.

Reviewing these posts, Mockler goes from an individual receiving public thanks from Black clients in the late 2010s to assuming a recurring role on neo-Nazi podcasts. By at least January 2021, Mockler had taken on the Aquila moniker and began appearing as a guest on other National Socialist podcasts.

ÜBERMENSCH IN HIS OWN MIND

Mockler is the principal recruiter for the Active Club Ottawa, a branch of a global decentralized movement of white-only workout clubs with chapters across Europe and North America. In Canada, a previous investigation by the Canadian Anti-Hate Network discovered that Active Clubs across Canada are being run by members and affiliates of the Vinland Hammerskins, a violent white power gang that’s been in Canada for decades.

The Aquila Telegram account has been listed as the recruiter for Active Club Ottawa since the chapter was founded. 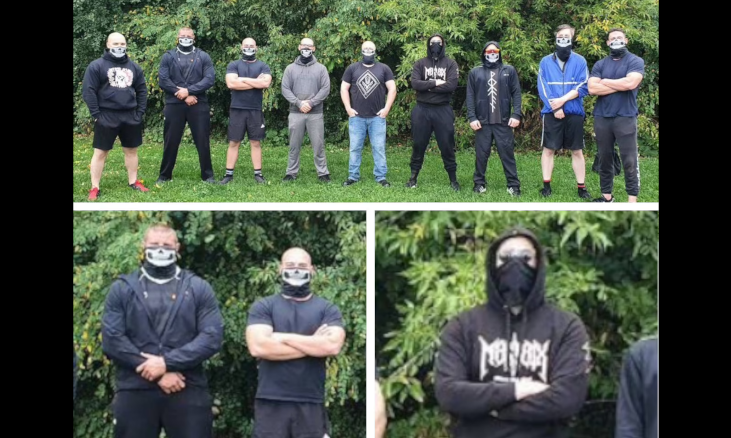 Also in the same photo appears to be Oshawa Active Club recruiter and Hammerskin Ryan Immel – based on his height, build, and clothing worn in previous photos. Multiple sources have told CAHN that Patrick Gordon MacDonald, AKA Dark Foreigner, is also a member of the Ottawa Active Club. MacDonald was a member of the Atomwaffen Division (AWD), one of several neo-Nazi organizations that emerged from the Iron March forum. Macdonald created propaganda for AWD and his style became a significant part of the aesthetics still used in the far-right militant accelerationist network known as Terrorgram.

MacDonald operated completely anonymously until he was exposed as an Ottawa-based graphic artist living with his parents by Vice World News in 2021.

As a recruiter, Mockler screens potential Active Club members in a multistep vetting process. According to their posts, the clubs meet weekly to exercise and train in combat sports. Photographs posted by the Canadian Active Club indicate they have chapters in British Columbia, Alberta, Ontario, and the Maritimes.

Using his position on Fashcroft’s stream, Mockler has interviewed Robert Paul Rundo, the American white nationalist and creator of the Active Club movement, several times. The clubs are a reimagining of the Rise Above Movement (RAM) – a violent fascist group of street enforcers founded by Rundo in 2016 as “DIY Division.”

Rundo began RAM with a series of public workouts to draw in “racially conscious” white men. The group quickly developed into a visible force at American right-wing protests – including the Charlottesville, Virginia’s Unite The Right rally and several others. RAM’s ranks notably included members of California’s Hammerskins.

A series of investigative reports by the publication Belingcat placed Rundo most recently in Bulgaria.

Mockler wears Rundo’s Will 2 Rise (W2R) clothing in several of the promotional videos he has released for his Ottawa gym on social media. There do appear to be some half-hearted attempts to conceal the branding, including partially covering the W2R logo on his shorts and blurring out the back graphic of a t-shirt – but not the logo on the front.

During a meet-up of multiple Canadian Active Club branches, Timothy Coish, also a former hockey player, flew in from BC to attend and document the event. Coish is the editor of a small neo-Nazi themed blog.

“if your heart yearns for Total Aryan Electoral Victory, the first step is still grassroots local communities, the likes of which you can find at your local Active Club,” Coish wrote in his glowing coverage of the event.

Mockler is the administrator of multiple channels on the encrypted chat application Telegram. On the surface, the channels and their themes seem very straightforward. One provides fashion advice on men’s clothing, with many individuals posting their outfits, “pro-white” clothing outlets, and offering varyingly competent advice on fashion. Another focuses on promoting bodybuilding and exercise.

Both channels, however, were for a time part of another big project in Mockler’s life: the Church of Aryanity.

The Church of Aryanity is the creation of Aaron Barret Chapman. A racist skinhead since his teens, Chapman is a former Grand Dragon of the Knights of the Nordic Order (NOK) and a founding member of the first chapter of the Traditionalist Workers Party.

The definitive report to date on Chapman and the Church of Aryanity was published by the SoCal Research Club.

Much of the work foundational to Aryanity was allegedly revealed in prophetic visions to Chapman, he claims, despite the texts relying heavily on the well-worn esoteric work of fabulist Helena Blavatsky and her root race theory. Other figures deified by Chapman and his followers include Savitri Devi, whose writing would come to form Esoteric Hitlerism; Julius Evola, a Traditionalist and fascist philosopher; and Ben Klassen – the white supremacist founder of the Church of the Creator.

Before their falling out, Mockler regularly promoted the organization on his channels. He encouraged his followers to look into Chapman’s allegedly new philosophy and sharing its content while he was with the CoA.

“Aryanity unites Christians and Pagans through our common shared histories,” Mockler wrote on Telegram channels after linking to Aryanity’s website. “We have biological imperatives to physically strive that are also shared in our blood. We are here to share those experiences together as we rediscover ourselves as a people.”

Chapman has made a habit of collecting typically young, influenceable men receptive to his bizarre messianic self-image. While Mockler is somewhere in his late 30s, he became one of the church’s most ardent followers, quickly being elevated to the position of “Canadian Grand Master.” Despite being “anti-vaxx,” conflict over an outright ban on relationships with vaccinated people divided Mockler and several others from the group.

CAHN first became aware of Aryanity after another Ontario resident, tattoo artist Nick Bennett, was found to be a member. Bennett and several other individuals, many of whom are former members of the Steel City Proud Boys, run a series of propaganda channels on Telegram and meet-up groups in Southern Ontario. Other Canadians within CoA include Andrew Benson, a man with a long, quixotic history of affiliations with racist skinhead crews in Alberta and Ontario. 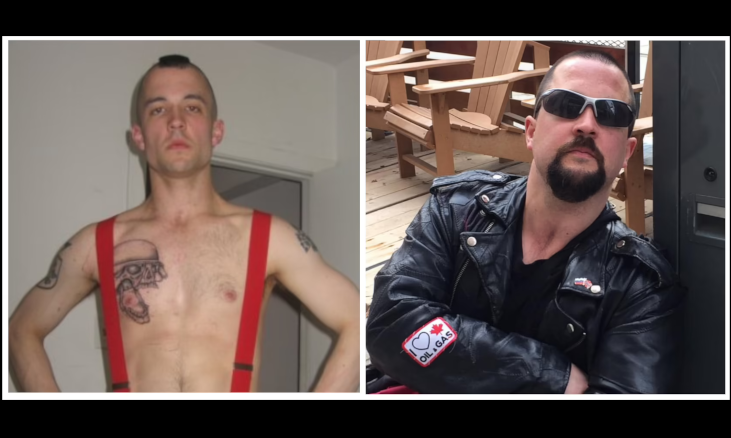 Benson is also a regular participant in the White Lives Matter protests in and around Toronto.

Mockler has not rejoined the church but both he and Chapman have expressed regret over the breakdown of their relationship.

Ben Mockler did not respond to requests for comment on this article.